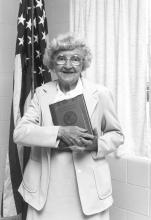 As an archives intern, I have worked with the Chanute Collection over the last nine months processing records from the former Air Force Base and aerospace museum. In my work, I regularly handle records and documents I find of great historical interest and importance. However, due to the large amount of work that needs to be done with the collection my time is limited. These artifacts are in my hands for only a moment, yet many are worthy of more investigation and attention.

Every once in a while, I am so astounded by a story, or a person, that I sit and closely analyze the records. This occurred recently as I opened the file of Lucy Goff. Goff’s story was interesting to me not only for her many contributions to the base and museum but also for her close and dear friendship with base historian Donald Weckhorst. Goff was more than a supporter of Chanute. Like Weckhorst, she embodied what made the base such a special place for the millions of men and women who lived and worked there throughout its history.

Lucy Goff (née Coe) was born on October 15, 1909, to John and Linnie Cowper Coe in Rochester, Illinois. In her teen years, Goff attended Winchester High School in Winchester, Illinois and graduated in 1928. After graduation, she studied horology at Gem City College in Quincy, Illinois and then spent two and a half years at the University of Illinois in Urbana-Champaign. Following graduation, Goff became a secretary at UIUC for ten years, before she was recruited by the Armed Services YMCA in 1943. She served as their program director from 1943-1975. In 1951, she transferred to Chanute where she operated the USO and YMCA until 1975.

During her tenure, she worked tirelessly to expand the USO’s involvement on the base. Upon arrival, she immediately sent correspondence to over 175 local groups and organizations asking them to help Chanute by offering goods and services. These “cake, cookie, and pie” groups came from across Illinois, some traveling upwards of 75 miles to deliver their goods. This resulted in impressive donations of sweets to the base, including thousands of cookies and cakes for holidays. Christmas brought nearly 7,000 dozen cookies from different groups and one year the Chanute Officers’ Wives Club provided 135 cakes in a single day.

Beyond Goff’s acquisition of sweet treats for base personnel, she also organized and hosted dances. To ensure the young men had dance partners, she formed the Girls Service Organization, which contained junior volunteers from the surrounding communities. Approximately 1,500 women were junior volunteers, and despite Goff’s request that they do not date Chanuters 40% married servicemen. 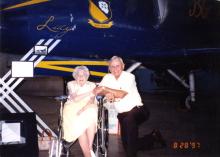 After her retirement, Goff was a founding member of the Chanute Heritage Foundation along with base historian Donald Weckhorst. Goff was instrumental in preserving the history of the base and was honored for her service in various ways, including having two streets named after her, one in Rantoul and another in her hometown of Loda. Her portrait hung in the lobby of the Chanute YMCA, a plane was named in her honor, and an exhibit at the Octave Chanute Aerospace Museum was dedicated to her service.

She was an honored guest at the closing of the base in 1993, and a year later the museum hosted a USO-style dance party to celebrate her legacy. Goff died in 2002 but was a stalwart Chanuter until the end. Our records reveal correspondence between the 92-year-old Goff and Don Weckhorst months before her passing where she requested a list of museum projects she could fund through her estate.