A Dillman family researcher recently wrote to the Archives with a question about his ancestor, Walter Dillman. He wanted to know where and when Walter died. The researcher already had some family background information and a transcription he made of an obituary from the Find a Grave website. The transcription stated that Walter Dillman (1881-1946), was buried in Yearsley Cemetery in Champaign County, IL. He stated that the name and date of the newspaper were not given. *Some assumptions were made when he transcribed the article, one that was incorrect and the other that was at least partly correct.

To answer this researcher’s questions and suss out the assumptions, Archives Assistant Karla began with a quick search of our catalog, Local History Online. The results showed several listings for people with the name Walter Dillman. One listing for microfilm was an obituary for Walter Dillman printed in the News Gazette on December 21, 1946, page 3.  Looking at the newspaper microfilm it stated that Walter Dillman died in Oconee, Georgia, not Oconee, Illinois, as the researcher had assumed. What it did not include was any mention of a wife. It had the names of his parents, his children, and siblings, but it did not mention where he would be buried.

Searching the Courier newspaper microfilm around the same date, another article was found. This article also gave the place of death as Oconee, Georgia. In addition, it gave the names of the parents, a year of birth, the name of the cemetery, the name of an additional child, another sibling, and some variation in name spellings that the researcher would need to check out. A wife was mentioned but once again no name was given. 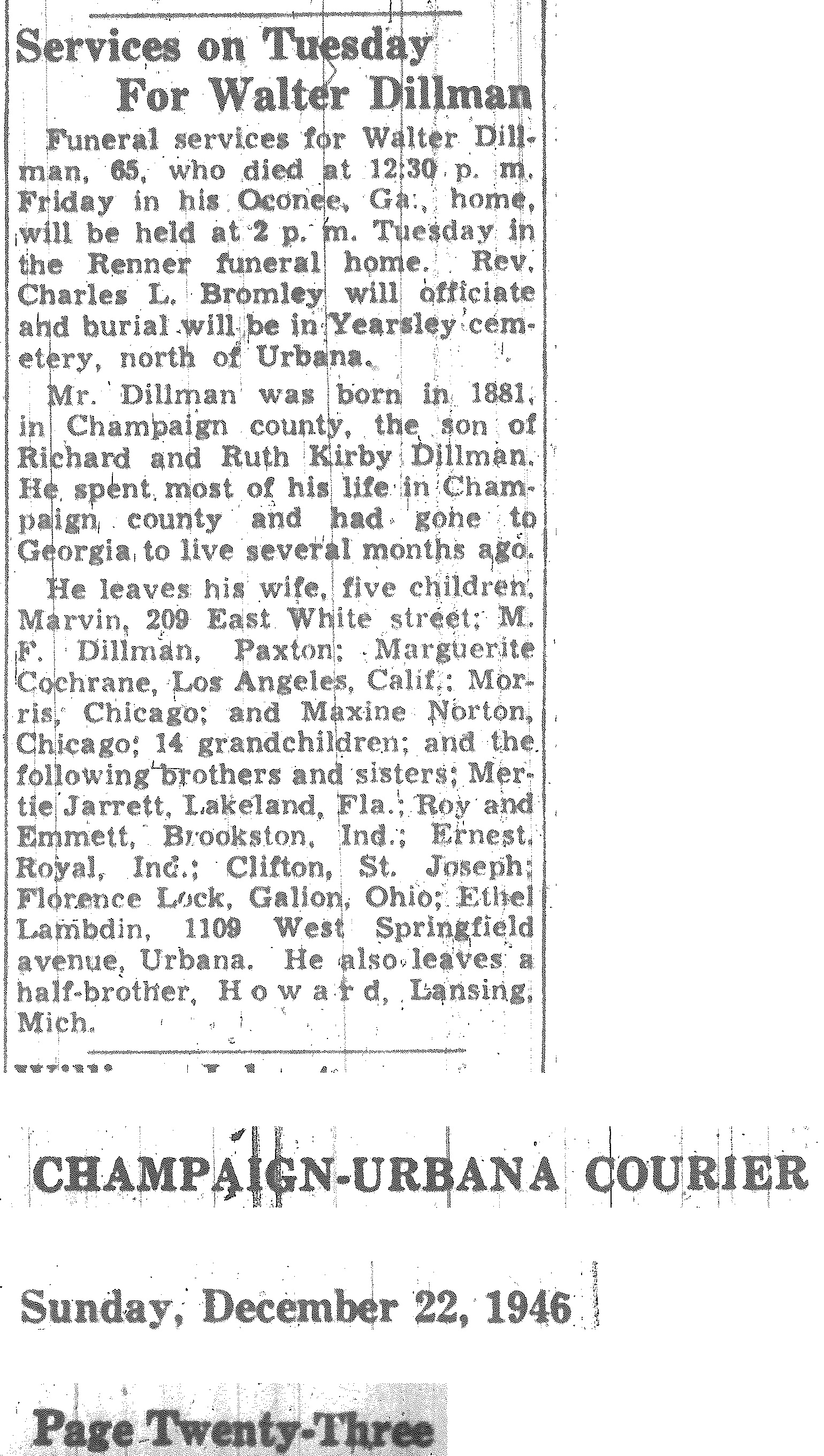 The place of death given in both articles is Oconee, GA. and both have an implied death date of December 20, 1946. Using information from the obituaries, you can search on Ancestry.com to look for additional death information. Ancestry has an index of Vital Records for Georgia: Deaths, 1919-1998 that has an entry for a Walter Dillman, age 65, who died on December 20, 1946, in Washington County, Georgia, USA. The certificate number is 26637. There is an Oconee in Washington County, Georgia. No other information is included in the index as far as parents or spouse. The researcher would need to check the actual death record to see if it contains that information.

Many obituaries contain inaccurate or conflicting information, so it is often helpful to make a spread sheet or a word document to compare the information found in each article. Then, compare this information to other information or legal documents that you have. Also make a list with the name of the paper, day of the week, and date in which the item appeared and make a note as to how often the paper is published. If it is a weekly newspaper, what day of the week was it printed?

The second assumption that the researcher made was that Jessie Brownfield Dillman was Walter’s wife when he died, but was she? Jessie Dillman’s gravestone in Yearsley Cemetery includes her birth and death dates, (1880-1961). There is a listing in Local History Online for an obituary on microfilm from The News-Gazette on Wednesday March 1, 1961, page 7. The Courier was also searched, and an article found on March 1, 1961, page 12.

Note: 1909 is the correct year of marriage but the month should be November.

The listing of Walter Dillman’s death in Jessie’s obituaries would make it appear that she and Walter might have been married when he died, but that is called into question by a Champaign County Divorce Case #8969 (1929) Walter Dillman vs. Jessie Dillman. Walter filed for a divorce and a divorce decree was granted February 1, 1930. At that time Walter had been back living in Champaign County for over a year and Jessie was living somewhere in the Chicago area. Their youngest daughter Maxine (age 9) was living with Jessie. Hopefully, the Georgia Death Certificate will provide the answer to the researcher as to the name of Walter’s wife when he died.

*Note:
This clipping of the article “Walter Dillman Taken by Death” was found on the Find a Grave website for Yearsley Cemetery, Champaign County, IL. Below the obituary is a note “added by Joy Pendry”. The Dillman researcher had said in his letter that the article was not sourced. To see the source information, you need to click on the obituary in Find a Grave. That will show the original clipping and the source information. The article is listed as coming from The Sandersville Progress (Georgia) January 2, 1947.