There are few occasions in which printing your own money would be an appropriate solution to a financial crisis. However, Urbana did just that during the Great Depression.

The stock market crash of October 1929 caused many people to lose faith in financial institutions. Depositors were withdrawing their savings from banks and closing their accounts for fear of security. Most banks did not have enough cash on hand to grant so many withdrawals in a short span of time and this only served to justify those fears. Many banks were forced to close permanently.

On January 19, 1932, Urbana Mayor Reginald C. Harmon issued a proclamation that declared a bank holiday for the next four days. Citizens were encouraged to sign a petition of faith in the banks and pledge not to withdraw funds “until this present period of hysteria has fully subsided, and if all the depositors of the Community will do likewise the banks will be saved...”

The same thing happened again in March of 1933. This time it was the Governor of Illinois, Henry Horner, who declared a bank holiday for the entire state of Illinois from March 4-7. This was followed by a four day bank holiday declared by newly elected President of the United States, Franklin Roosevelt that kept all banks closed until Congress could act.

It was during this time that the Urbana Association of Commerce formed the Bank Emergency Committee to devise solutions for the city. A major fear was that commerce would suffer or even stop while assets were tied up in the banks and currency slipped out of town in typical transactions. A few ideas were proposed. One was to have customers pay merchants with checks instead of cash, but this would only leave merchants with checks that could not be deposited as long as banks remained closed. Another option was to use ‘scrip’ or a substitute for legal tender, which would work as an IOU. However, the result would have been similar to using checks.

Instead the implemented solution was to print local money. Beginning March 7, citizens could buy “Urbana Money” which was backed dollar per dollar using U.S. currency stored under seal in vaults. They could then use this money in Urbana to buy local goods and services. Employers were also encouraged to pay their employees at least in part with Urbana Money. Approximately $10,000 was placed in circulation initially and another $2,500 was issued a few days later. The worth of bills ranged from 10 cents to $5. 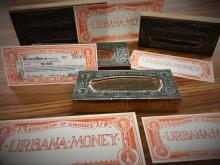 The idea was to keep money in Urbana, as it could not be spent outside of town. The plan worked and business continued successfully for the rest of the month. Banks in Urbana reopened on March 31 and Urbana Money could be redeemed the next day.

Today, the original printing plates and multiple bills of Urbana Money are held in the Archives.