Here in Champaign County the school year is drawing to a close. University students have finished their Spring semester, many have headed home for the summer, and K-12 students and teachers are eagerly awaiting their own summer break. For those individuals in the Air Force, however, education is often asynchronous. Basic Training is and was, generally, eight and a half weeks long and the technical training that followed could vary from six to 72 weeks depending on the career field that the airmen and officer’s followed.

Rantoul’s Chanute Air Force Base may have been best known to the community for its larger than life air shows and displays during their Open Houses, but the base was primarily a technical training school. 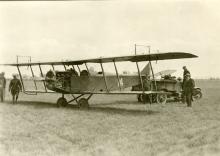 Although the United States had been the birthplace of powered flight, the Army Signal Corps originally paid little attention to it. Even as World War I progressed in Europe, America did little to build its air strength. That is, until Chanute and thirty-two other Air Services training camps were established in the spring and summer of 1917 after the United States' entry into World War I.

Chanute Air Force Base, home of what was once one of the oldest Technical Schools in the Air Force, was established in 1917 to train pilots for World War I. July 18, 1917 marked the date when a dozen Curtis “Jennies” with an instructor and student in each took off as the first formal instruction at the base. 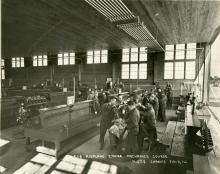 In 1921 the “Army Enlisted Mechanic School” was established at Chanute when mechanic and technician courses were transferred from Kelly Field, Texas. During the following year, the Photography School at Langley Field, Virginia, and the Air Force Service Communications School in Ft. Sill, Oklahoma, were added to the Technical Training Program at the Base. The original school embraced the fields of photography, communications, and armament -- and from 1922 through 1938, Chanute served as a training school for all Air Corps mechanics.

1938 marked the beginning of the expansion program when the base was given eight and a half million dollars to construct more modern facilities. Buildings constructed as a result of the appropriation of these funds include all of the centrally located buildings and large hangars. 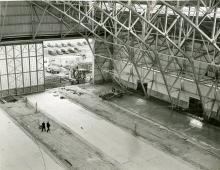 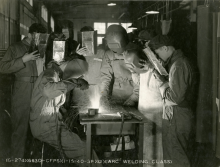 Following World War II, Chanute continued to serve as a training installation for aerospace and weapon system support personnel under a variety of organizational titles. The installation was designated in 1959 as the Chanute Technical Training Center, which was later designated the 3330th Technical Training Wing. In July 1971, military flight operations were terminated at Chanute, and it became a non-flying training base, until September of 1993 when all military operations ceased and the facility became available for other civilian and commercial uses.

Many changes took place in the scope of courses offered as the concept of training changed in order to meet the ever changing demands and requirements of the Air Force. Over the years, the primary mission of Chanute Air Force Base would come to be known for providing technical training to both officers and airmen in the fields of weather, specialized aircraft and engine mechanics, aircraft maintenance management, instrument trainer reparation, guided missiles, maintenance management, production control, flight engineering, crafts and trades training, and more. In addition, personnel from other branches of the Armed Forces, as well as allied students, were also selected to attend courses in the Technical School. Chanute played a vital part not only in the development of the US Air Force, but in shaping the legacy of Rantoul and Champaign County.