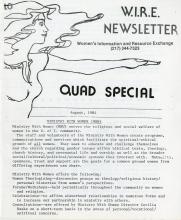 Women’s Information and Resource Exchange (W.I.R.E.) Records. The W.I.R.E. was a telephone information and referral service run by the Ministry with Women at Wesley United Methodist Church in Urbana and McKinley Presbyterian Church in Champaign. The telephone service was dedicated to connecting women in the Champaign-Urbana community with professionals who could meet their needs, including lawyers, physicians, counselors, support groups, political organizations, and education services, among others. The W.I.R.E. was also involved in the publication and distribution of the Women’s Community Newsletter, which served as a communications network between services, programs, and the concerns of women. They also promoted, participated in, and occasionally offered events focused on the education, empowerment and political activism of women. 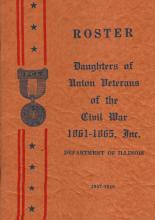 Daughters of Union Veterans of the Civil War Records. Daughters of Union Veterans of the Civil War is a national organization with an overall governing structure, a sub-set of governing bodies by state, and an internal officer structure for each local club called “tents.” Each Tent is named after a Union nurse active during the Civil War or other important women on the Union side. The Champaign club, Tent #62, was named for Union nurse Catherine Bradley Rogerson. Tent #62 was founded in 1924 by a group of local women, including Eleanor Balnum and Effie Church, who would both go on to be presidents of the club. The local branch was involved with the Grand Army of the Republic, and its successor organization, Sons of Union Veterans of the Civil War. Every meeting, the local branch collected donations for the Flower Fund, which they used to send flowers to Union war veterans and their families. The club was occasionally involved in petitions and motions to protect the use of the Bible in schools. 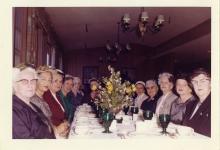 Near O’Kin Bridge Group. The Near O’Kin Bridge Club was a monthly bridge club active in the Champaign-Urbana area from the 1930s through 1992. The club members appear to be extended family and friends. Frequent family names in the collection are Edwards, Huss, Maxwell, and Yearsley. Members took turns hosting the meetings in their homes and, in later years, at local hotels and social clubs. Each meeting consisted of a brief business meeting, a luncheon, and playing bridge. On May 28, 1992, it was decided that the club would continue as a “lunch only” gathering and meet twice a year – in October and in April.