While researching early newspaper articles about the Urbana Lincoln Hotel, I stumbled upon a small piece in the Urbana Daily Courier from August 6, 1934, regarding Abraham Lincoln's "mad" couch. The author discussed how travelers regularly used this "mad" couch in the Maplewood Hotel's lobby in Berlin, Wisconsin. Made specifically for Lincoln, as it is six feet, six inches long, the couch was reportedly from his office in Springfield. The provenance of the couch is recounted in the article. It was first left with General Brayman, "a close friend" of Lincoln's who acquired it presumably when Lincoln died. Though the article says when [he] did not return to Springfield," a much more polite way to say they took a dead president's furniture. After coming to Wisconsin, the couch was given to Dr. Victor Kutchin, who owned it at the time of the article's writing. The ownership story ends there at the end of a tiny, two-paragraph article placed among the "Evening Courier's Page of Interpretation and Opinion." [1]

As such an important figure in US history and, of course, Illinois history Lincoln's belongings are subject to much interest. The Abraham Lincoln Presidential Library and Museum in Springfield, just a few hours from Urbana, has one of the largest Lincoln artifact collections. The University of Illinois at Urbana-Champaign has some interesting holdings, including an entire library dedicated to collecting Lincoln's history, aptly called The Illinois History and Lincoln Collections.

Lincoln's "Courting Couch" is well preserved at the Springfield Art Association's collection. The couch, which came from the parlor of Ninian and Elizabeth Edwards of Springfield, is where Abraham Lincoln famously sat and courted his wife, Mary. At 180 years old, it was brought to The Conservation Center, and a team of conservators worked tirelessly to restore this unique piece of history. [2] There is no denying the uniqueness of furniture associated with America's 16th President. Where is the "mad" couch then? I decided to investigate the current whereabouts of Lincoln's 'mad' couch.

I began by researching the most recent known owner of the couch, Dr. Victor Kutchin. I found a biography about him on a blog called "The Life and Writings of Harriet Shikoski." Harriet had worked in his hotel. In 1942, she wrote that when she worked at Maplewood, the hotel founded by Dr. Kutchin, five years after his death in 1939, that his office stood as it did in his life. There were several "Indian artifacts in the office," as well as "an old fashioned desk and a couch where one could rest." [3] Could this couch be Lincoln's "mad" couch? Though that is the only mention of it in the blog, it may be the same couch. 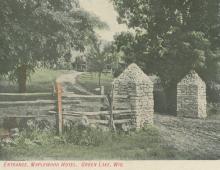 The Maplewood Hotel closed in 1956 and was torn down in 1958. Where then, did Dr. Kutchin's furniture go? In an autobiography on that same blog, Harriet Shikoski noted that around 1952, Mr. Kutchin (presumably Victor's son), had asked her husband, Charlie, for help around the Maplewood land. While Mr. Kutchin could not pay Charlie in cash, he did trade his labor for Maplewood Hotel furniture. Through this, they were able to furnish their home with "beds, dressers, chairs, and other items." Could the "mad" couch have possibly been traded here?

An article from 2005, announcing new plans for the vacant lot where the old hotel had stood, mentioned that while a local corporation bought up the land, the Kutchins retained the home next door. In 1975, Peggy Kutchin held an antique auction on the grounds when she decided to move to North Carolina.[4]  An auction should have some record, right? Wrong.

It seems the buck stops here, as I could not find anything about that auction in 1975. Of course, while this search may have been all speculative, it sure was fun. There is always the very likely scenario that the couch is gone. Destroyed, discarded, abandoned, much like most of our belongings. While there is only one Abraham Lincoln and his furniture tends to be preserved, you cannot save everything, no matter how "mad" the name and famous the owner.