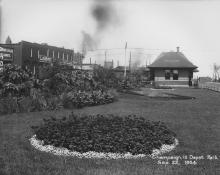 Illinois Central Railroad’s (ICR) history began in the 1830s with a series of federal land grant programs for economic improvement across the state of Illinois. The programs were supposed to expand the market for Illinois agricultural produce, but in reality, the state was left nearly bankrupt. One of these programs, the Land Grant Act of 1850, led to Illinois Central Railroad’s charter in February 1851. The original goal for ICR was to build a north-south rail line from Chicago to Cairo, Illinois with a total of 704 miles of track. After the initial railway was completed in 1856, the railroad’s expansion continued through 1882, at which time ICR provided a direct route from Chicago to New Orleans and was dubbed the “Main Line of Mid-America.”

What did the construction of the Main Line mean for life in Champaign County? ICR had a tremendous impact on national trade and transportation, and Champaign County experienced a population boom due to the construction of new railroad depots. Between the years of 1850 and 1860 the population of Champaign County increased by nearly six hundred percent. ICR’s local impact also led to the founding of the city of Champaign. Previously dubbed West Urbana, Champaign began as a depot stop on the ICR line, which promised growth and urban development along its transportation route. In turn, thousands of settlers migrated to the area creating a twin city to Urbana with its own culture and business district. Other towns in Champaign County that were located on the ICR line include Rantoul, Savoy, and Tolono.

Above is an example of an Illinois Central Railroad Company Personnel Department employment card. Information contained on the card includes:

The card also includes a street address for Abbott, along with employment information from the railroad company.

Illinois Central Railroad Company Personnel Department employment cards are available for browsing on microfilm under the call number A Microfilm 385.0977 ILL at the Champaign County Historical Archives of The Urbana Free Library.