“Roses are red, violets are blue;
A peek onto Main Street,
Will provide a story for you.”
- The Heart of Urbana Gremlin 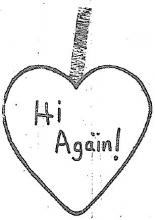 The Morning Courier awoke to that mysterious greeting on their doorstep, February 14, 1979. Looking down the street, Courier reporters discovered that parking meters and store and office doors in the downtown Urbana area were festooned with Valentine’s greetings of red ribbon apparently the work of Urbana’s ‘Gremlin.’

The Gremlin resurfaced a few weeks later adding HUGs to the hearts. This time businesses felt the love as the Gremlin bestowed its ‘Heart of Urbana Gremlin’ Awards (HUGs) to downtown property owners who invested in renovations. The Gremlin’s proclamation declared:

I heard rumors that downtown Urbana was dead. So I went to prepare for the funeral. But I found that a resurrection had begun and a funeral would be premature. Some owners seem content not to get on the bandwagon or to just roll over and play dead. But we have some live wires in our community who can see past their own noses.
Since they are doing something nice for us (funeral arrangements for a whole downtown are cumbersome and expensive for the taxpayers), I decided someone should do something nice for them.
Call off the funeral! Downtown Urbana ain’t dead!”

And this is where mentions of the Gremlin cease, at least as far as I can tell from the information available. The Morning Courier, where the Gremlin posted its poems and proclamations printed its last paper March 31, 1979.