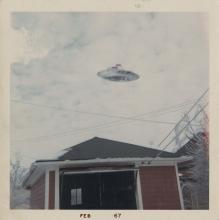 On May 9th, 1971, an Indiana man visited the Vermillion River Observatory operated by the University of Illinois in Danville to view the dish antenna. He arrived a little before 10pm and brought a set of binoculars with him to see a detailed view of the structure. As he investigated the antenna, he noticed an object in the sky that quickly approached from the southwest. He immediately set down the binoculars and grabbed his Polaroid camera, hoping to get a photograph of the approaching object. As he snapped a photo, the object silently moved nearer to the observatory in the quiet night. The craft moved overhead and the quiet eerily transformed into a loud humming noise. The man looked into the sky and saw an object “as black as the Ace of Spades – like burned metal,” with no lights emanating from its surface. The object was larger than the antenna and spun like a top.  The man fumbled his camera in an attempt to take another photograph and the object quickly disappeared into the night, leaving him in shock and disbelief.

These incidents led to the creation of a program in 1948 to deal with the reports known as Project Blue Book (also known as Project SIGN and Project GRUDGE). According to the U.S. Air Force, the objectives of Project Blue Book were two-fold: “first, to determine whether UFOs pose a threat to the security of the United States; and, second, to determine whether UFOs exhibit any unique scientific information or advanced technology which could contribute to scientific or technical research.” Upon completion of investigations on individual reports, the military stamped them with IDENTIFIED, INSUFFICIENT DATA, or UNIDENTIFIED headings. Despite the numerous sightings and number of unidentified crafts, Project Blue Book found no evidence of UFOs that posed a threat, offered new technologies, or appeared to be extraterrestrial in any way. In 1969, the project was shut down, and the military directed civilians whom sighted UFOs to contact their local university or educational institution with concerns.

The sighting at the Vermillion River Observatory in 1971 occurred after the closing of Project Blue Book, but was still handled by the nearest Air Force base, Chanute. On November 24, 1971, Chanute sent officers to interview the Indiana man, view/borrow his UFO photographs, and determine the legitimacy of his claims. Six months later, in June of 1972, Chanute contacted him and returned his records. He was thanked for his service, and urged to consult his local scientific community for deeper examination and insight. Chanute’s role in investigating this claim was questionable in lieu of Project Blue Book’s demise in 1969. When a concerned citizen contacted Chanute about their involvement with this report, they responded by saying that they did receive the materials about the Vermillion River Observatory, but they urged the citizen to contact local civil authorities. In reference to the question of the military’s involvement with the sighting, a Chanute Information Officer responded, “there was no investigation, and there is no report.”

This perception of ambiguous and questionable involvement of the U.S. military with UFO’s persists. Regular civilian sightings and science fiction media like The X-Files stoke the fire of conspiratorial intrigue related to the existence of extraterrestrials. This media presence continues to grow with The History Channel’s upcoming science fiction series Project Blue Book, which will focus on the former official and classified military investigation of UFOs. Chanute’s involvement and correspondence with UFO sightings is a small sample of a phenomena with ancient historical roots. From the farm fields of medieval peasants, to the Vermillion River Observatory, and beyond, humankind’s fascination with the unknown thrives and continues and in the words of The X-Files' Fox Mulder, “the Truth is out there.”