Throughout its history, Chanute Air Force Base (CAFB) had fifty-four commanding officers (CO) from 1917-1993.  Most COs had a brief stint at CAFB, many lasting less than a single year. One of the base’s first COs to hold the position for an extended period was Brigadier General Raymond E. O’Neill. O’Neill was commanding officer of Chanute from October 3rd, 1940 – November 4, 1944 and again from February 8, 1946 – April 30, 1946.

Brig. Gen. Raymond O’Neill was born in Port Townsend, Washington in May 1894. He attended the University of Washington and graduated in 1916 with a degree in chemical engineering. With the entry of the United States into World War I, O’Neill joined the military and was appointed second lieutenant of infantry and served a year in France as a company commander in the 20th Machine Gun Battalion. 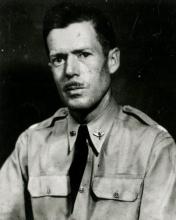 Following the war, O’Neill was promoted to Captain and sent to the U.S. Army Balloon school for training in Air Services. In 1921, he found employment in Illinois for the first time, serving as an instructor at Scott Field. Six years later, O’Neill was appointed to the position of squadron commander, which was followed by two years of duty as an instructor and student at the Air Corps Technical School. With this training in U.S. Air Services, he obtained his first commanding officer position in 1937, serving the 4th Air Base Squadron at March Field, California.

In 1939, O’Neill received a transfer notice to Chanute Air Force Base, then known as Chanute Field, in Rantoul, IL. He arrived for duty August 17, 1939 and was appointed Post Executive Officer, holding that position until his promotion to CO in November 1940. O’Neill took command of the base during one of the fastest and largest expansions in its history. International allies needed well trained technicians and airmen for their military, and with the U.S.’s entry into World War II in late 1941, we depended on them as well. Chanute Field grew and expanded in response. During his first tenure as CO, 600,000 personnel graduated from Chanute and he oversaw a complete renovation of the base, including the construction of the first permanent structures at Chanute.

After O’Neill left Chanute in 1944, he became a CO of an air force base in Florida before entering the Pacific Theater. Following the war, O'Neill returned to Chanute for a brief stint as a CO. During this time, the base struggled to cope with the returning soldiers and change in demand as a result of the war. They also experienced a massive housing crisis, as returning men arrived with families. As a result, barracks were transformed into apartments in an attempt to meet demand. 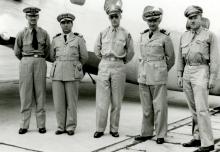 O’Neill left his second tour as CO of Chanute after only three months. Unfortunately, this would not be O’Neill’s last experience at the base. On the night of Tuesday, May 20, 1947, O’Neill was with six men flying a B-52 from the Pacific to Chanute. In the darkness and heavy rain of the night, the B-52 crashed into a muddy corn field two miles away from Chanute, killing all onboard. Four days later, a military funeral was held at the base for the men that lost their lives. Brigadier General Raymond E. O’Neill was interned at Arlington Cemetery in Washington D.C.