For just three special cosmic nights in Champaign County history, the Grateful Dead brought the eyes of the world onto Assembly Hall. After years of rumors, the Dead would play in Champaign. They finally made their first visit for a two-night run of concerts on February 21st and 22nd, 1973. 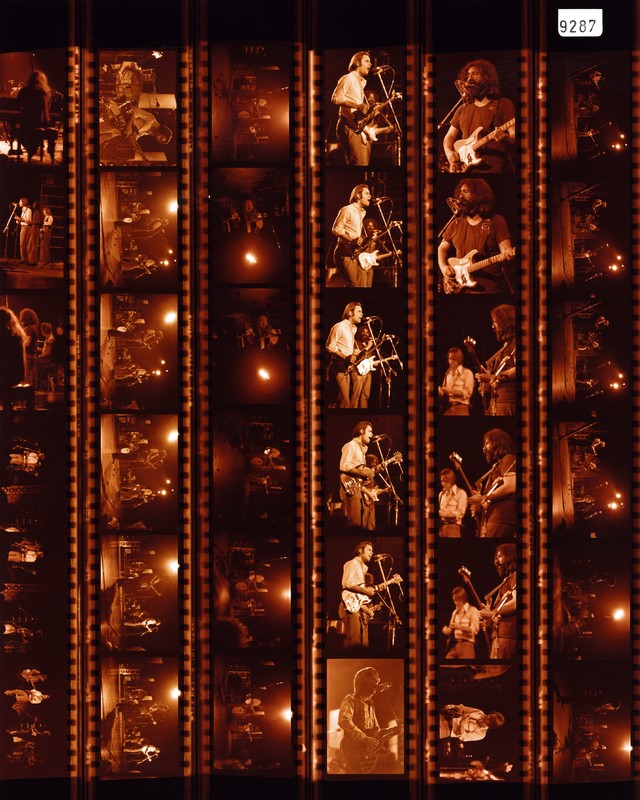 At this time, the band was barely a year into its first major lineup change. Founding keyboardist, harmonica player, percussionist, and vocalist Ron “Pigpen” McKernan was forced to stop touring in June of ‘72 because of his poor health. He was replaced by keyboardist Keith Godchaux, who brought his wife Donna Jean Godchaux to assist with vocals. Just fifteen days after the band left Champaign, Pigpen died at the age of 27 from a gastrointestinal hemorrhage.

Modern consensus is that the first night of the ‘73 run was not a particularly special show. The night opened with a set by the New Riders of the Purple Sage, friends of the Dead and typical openers for them during this period. Grateful Dead guitarist and vocalist Jerry Garcia sat in with the NRPS on pedal steel guitar.

The Dead played a typical setlist without any notable standout performances. The first set opened with “Wave That Flag.” It was just the fifteenth time the band played the song, which later became “U.S. Blues.” The remainder of the first set offered a mixture of Dead originals like “Brown-Eyed Women,” “Loser,” “Looks Like Rain,” and “Box of Rain.” They also played covers like Jesse Fuller’s “Beat it On Down the Line,” John Phillips’ “Me and My Uncle,” and Noah Lewis’ “Big Railroad Blues.”

The second set picked up with a hot opener of “China Cat Sunflower.” After a few shorter songs, the boys loosened up a bit and put their improvisational skills on display with back-to-back 15-minute versions of “Truckin’” and “Eyes of the World.” It was just the fourth time “Eyes” was played by the GD as it was just introduced two weeks prior. The night closed with a single encore of Chuck Berry’s “Johnny B. Goode.”

The second night of their ‘73 run at Assembly Hall is considerably more famous than the first. Here the band seemed to hit their stride and offered a slate of songs that featured well-executed shorter ballads and impressively improvised psychedelic jams. Again, the NRPS opened for the Dead with Garcia on pedal steel. The night did have quite a few repeats from the previous evening (something that became a rarer occurrence for the band as time went on) but the execution of the songs and placement in the set are considered by fans to be generally better than night one.

The Dead started off with a bit of a rocky “Promised Land” but their next song, a faster rendition of “They Love Each Other” than normally performed by the band, really set the stage for the evening. This was followed by what many argue to be one of the best renditions of “Bird Song” ever performed by the band. After a handful of classic ballads (both GD originals and covers), they closed the set with a scorching 17-minute plus version of “Playin’ in the Band” that featured an extended jam and put the band’s exceptional ability to weave sound and crowd energy on display.

The second set began much like the first set of the previous night with “Wave that Flag.” Also, much like night one, the middle of the second set saw the boys play two extended jams: first with “Dark Star” and then again with “Eyes of the World.” Although “Dark Star” was a bit short at around 13-minutes (it was the shortest version since ‘71 and one of the shortest in their catalog up to this point) it had everything that made this song great and was explored and executed to near perfection. After a high energy set closer of “One More Saturday Night” the evening finished with an encore of “Casey Jones.” 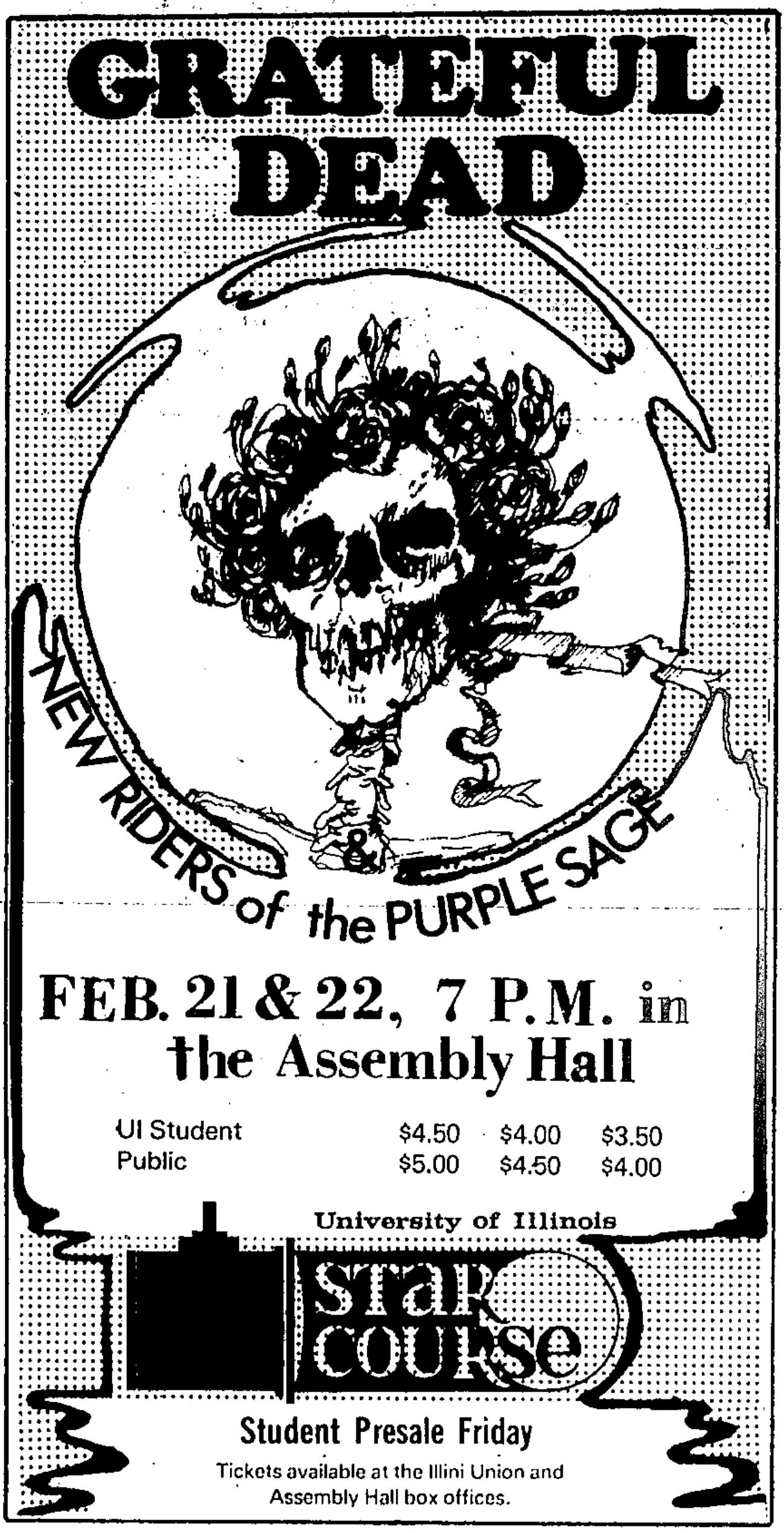 Advertisement from the Daily Illini, February 1, 1973.

Although long-awaited by fans, local coverage of the show was present but limited. There were a few advertisements for the concerts in the Courier and Daily Illini leading up to the show and both publications published a review, but nothing was featured in the News-Gazette. Of the two reviews, one of the authors only attended a single night and both reviewers were clearly unfamiliar with the band’s repertoire, but they still seemed to really enjoy the performances and understood why the Dead were such a unique force in the industry at the time.

Advertisement from the Daily Illini, February 21, 1973.

When the Dead returned eight years later for their December 2, 1981 show, there was even less publicity in the local news. With the Courier gone and the News-Gazette again not publishing about the Dead at all, only the Daily Illini promoted and reviewed the event. Although this time, the DI had a big Dead fan write the review so it was more nuanced and reflective of the band, their fan community, and the atmosphere both bring to communities when the Dead are touring. 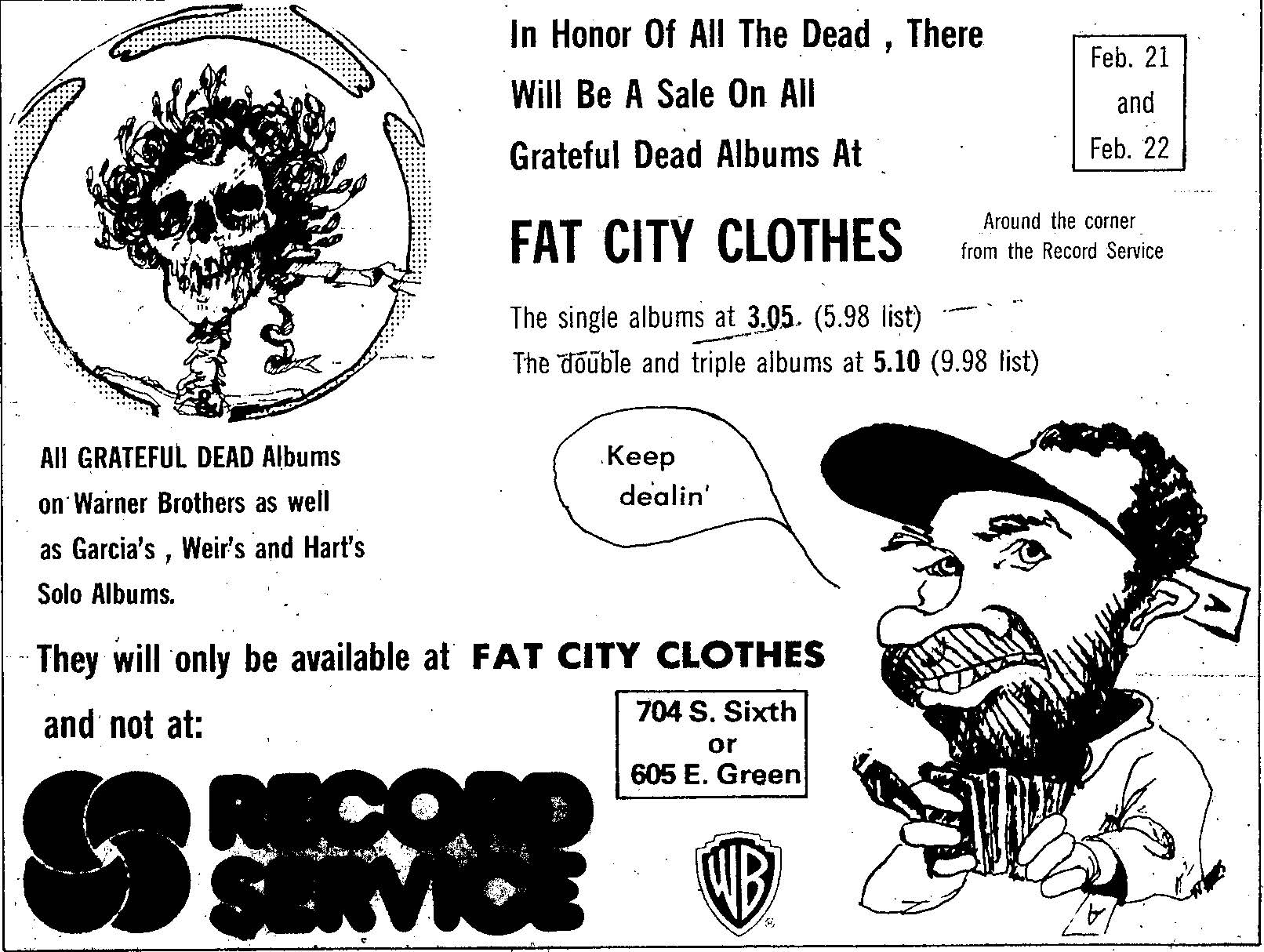 Advertisement from the Daily Iliini, February 21, 1973.

Like ‘73, the parking lot of Assembly Hall became a veritable shakedown street of homemade wares and other hippie capitalist commodities for passersby to peruse and purchase. Heady burritos and the economical grilled cheese were staple victuals of the scene and were undoubtedly being enjoyed by numerous fans as they arrived to the show. 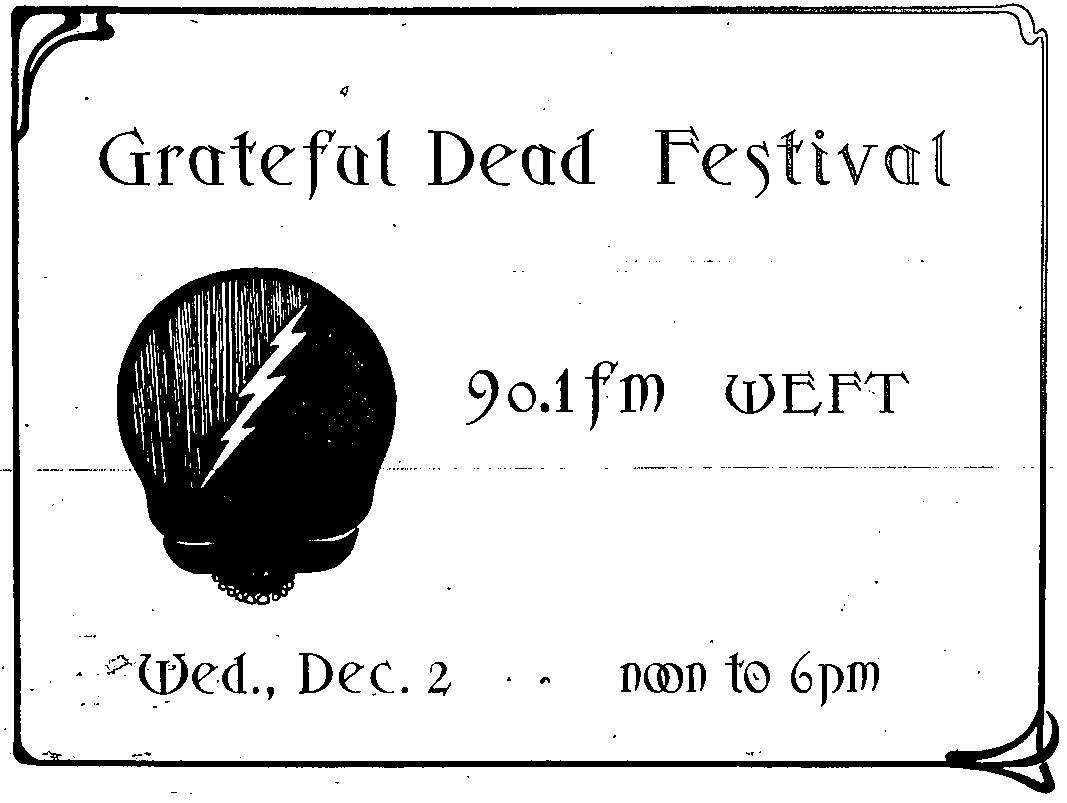 Advertisement from the Daily Illini, December 2, 1981.

The concert itself began shortly after 8pm and there were a reported 7,000 fans in attendance (much lower than the capacity of the building). Despite the non-sellout crowd, this show is considered a standout performance for the boys akin to the February 22, 1973 show. There was no opener, so the band got right to it and opened with a blazing “Bertha.” The first set then continued with a number of shorter, yet tight and well executed classic covers and GD originals and was topped off with the tandem of “China Cat Sunflower” and the traditional blues song “I Know You Rider.”

The second set is where the band put some of their well-known jamming skills on display. It featured 11-minute plus versions of “Franklin’s Tower,” “Terrapin Station,” and Buddy Holly’s “Not Fade Away.” They closed the set with The Rascals’ “Good Lovin’”; a song originally sung by Pigpen, but then picked up rhythm guitarist/vocalist Bob Weir after Pigpen died in ‘73. The night ended with a cover of Henry Thomas’ “Don’t Ease Me In”, although this is unfortunately missing from the available recordings of the show.

Interested in hearing these shows? Use the links below for a free listen!