On January 25th, 1935, Mark A. Greene graduated from the Air Supply and Technical Clerks course at Chanute Field. This course covered clerical subjects like typewriting, shorthand, organization, office machines, operations, business arithmetic, bookkeeping, military correspondence, and more. Greene described Chanute as “rundown buildings, many leftover from World War I.” According to Greene, “As a private, I was too poor in those days to afford a camera, but I don’t recall much that was worth photographing anyway.”

Greene’s instructor for the clerk’s course was named Frank Fish. Fish was well-dressed, meticulous, and very strict. Greene said at the end of every class, the students’ typewriters and other tools needed to be placed on the desk in a particular way. If items were placed even a quarter of an inch off, Fish corrected the student. Greene did well in the course and received a superior grade, graduating as one of the top students in his class. 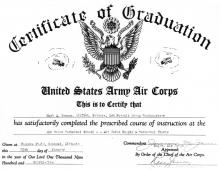 While at Chanute, Greene befriended an instructor named Everett L. Pond, whom he spent nights drinking with at local Rantoul saloons. When Greene was invited to see Pond’s home on base, he was depressed to see a married officer with children living in such poor conditions. Greene said this same quality of housing was found in Hawaii while he stationed there a year later. In 1945, Greene was stationed in Amiens, France, during World War II. One day, he traveled to Paris to get lunch at the local Red Cross restaurant, which he described as the only decent restaurant in Paris at the time. While dining, he noticed a lieutenant colonel sitting at a nearby table whom he recognized. According to Greene, “(he) looked like Everett Pond, but the uniform didn’t match up with the ‘old Army’ sergeant I had known 10 years earlier.” Greene decided to approach the lieutenant colonel, and sure enough, it was Pond, who was very happy to see Greene alive and well. They left the restaurant and reminisced about their time at Chanute before parting ways and never seeing each other again.

After the war, Greene was briefly an assistant bookkeeper for a construction firm in San Francisco before getting a civil service job as a Clerk-Stenographer and Hearing Reporter for the Department of Commerce. After this, he transferred to the Ames Aeronautical Laboratory in Iowa, where he was assigned to the Purchasing Section. Greene took other minor jobs after this, including a stint in the flight/glider program, before finally becoming a Squadron Supply Officer. Greene worked in Ames, which eventually became the Ames Research Center (NASA), from 1946 until his retirement in 1969. His last job at the base was Assistant Chief of the Procurement Division and Contracting Officer. According to Greene, he retired “at the age of 55 and 15 minutes.”