Leonard is in the first row, left of center

After graduating, he transferred to Chanute on June 15 as a First Lieutenant, Air Service. While stationed at Chanute Field, Leonard held an impressive number of positions, especially considering his brief stint at the base. At one point or another he was an engineer officer, air service supply officer, post quartermaster, signal officer, ordinance officer, personnel officer, maintenance officer, fire marshal, post exchange officer, education and recreation officer, transportation officer, recruiting officer, officer in charge of flying, purchasing and contracting officer, post adjutant, and finally, commanding officer. During his time as commanding officer, the base was applauded for its extraordinary condition. According to a commendation report from the time, “the general condition of the field reflects credit upon the Commanding Officer and upon Quartermaster Charles M. Leonard, Air Service.”

While at Chanute, Leonard logged 244 hours of flight. One of those flights nearly ended in tragedy. On April 29, 1921, 5,000 thousand citizens of Ottawa, Illinois patiently waited for two planes to arrive from Rantoul. They gathered to see the new and innovative flying machines of the U.S. military, which were sent to Ottawa on a recruiting mission. One of the planes arrived on time two hours after taking off at 9 a.m. The other plane was unaccounted for until it was discovered that the pilot, Charles Leonard, crashed his Curtiss Jenny. Leonard, in an effort to impress, took a young lady onboard the flight to show off his aerial skills. Leonard took the plane to approximately 4,000 feet and did a spiraling nose-dive toward the earth. After making the sensational dive, Leonard made a daring attempt to pull the nose of the plane up close to the ground but failed and crashed into the soft dirt. Both passengers survived with minor injuries. In the post-crash interview with local news, the young woman avowed to be a “great deal more attentive to her religious duties” and “didn’t hesitate to announce her gratitude at being on terra firma (again).”

In early 1921, Leonard was transferred to the Aviation General Supply Field in Fairfield, Ohio and left Chanute. Newspaper articles from the time lamented the loss of the great commanding officer and wished him well in his future endeavors. Sadly, Leonard’s career was cut short in 1922 while travelling on vacation with his family in China and Japan. During a flight from Japan to Manila, Leonard contracted pneumonia and died suddenly. Rantoul honored Leonard with a five-plane formation missing a single flyer that circled the city and base following his death. 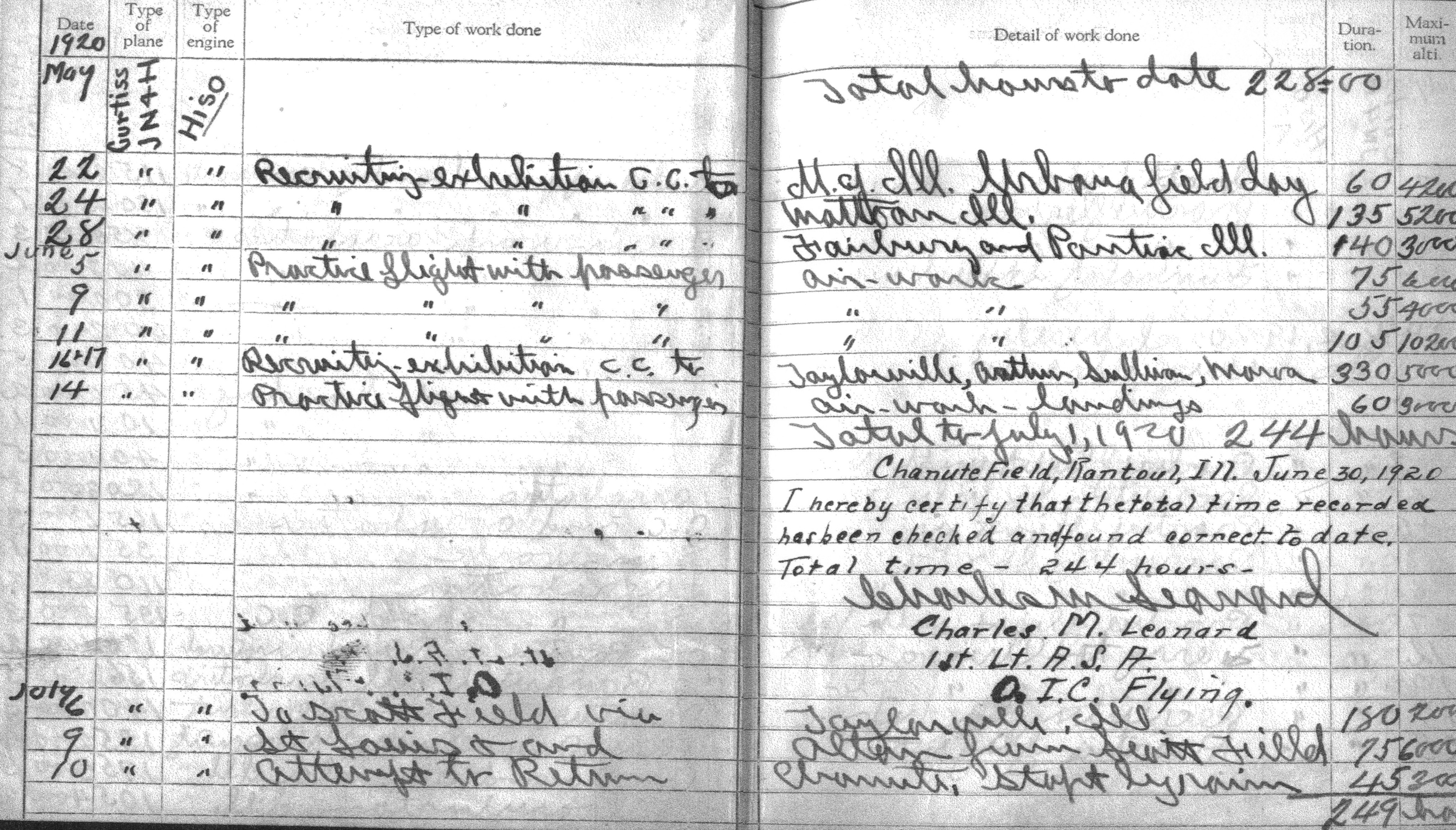