Alberta Claire: The Girl from Wyoming

Throughout American history one of our nation’s strongest assets has been our entertainment industry. From the celebrity of Benjamin Franklin wooing the French court to support the American Revolution to the modern world of social media, Americans have traded on their ability to entertain for nearly two and a half centuries.

In the late 19th and early 20th centuries, the entertainment genre known as Vaudeville took western society by storm and quickly dominated American culture. Oft quoted as “the heart of American show business,” Vaudeville acts were variety shows that included acting, music, dance, and other types of entertainment. Through Vaudeville, concert saloons, black-face minstrelsy, freak shows, dime museums, and the American burlesque became standards of American theater for  decades. Thousands of Americans tried their hand as Vaudeville performers, traveling with troupes from town to town to perform their acts in hopes of building celebrity and packing their pocketbooks.

One such performer was Sheridan, Wyoming’s Alberta Claire. Born Nellie Armstrong in the early 1890s, Claire seems to have taken the stage name of Alberta Claire from her mother and used it for her Vaudeville career that spanned 1909 through about 1913. As a Vaudeville performer, Claire initially did a song and dance routine that included a “toe-tapping” performance. 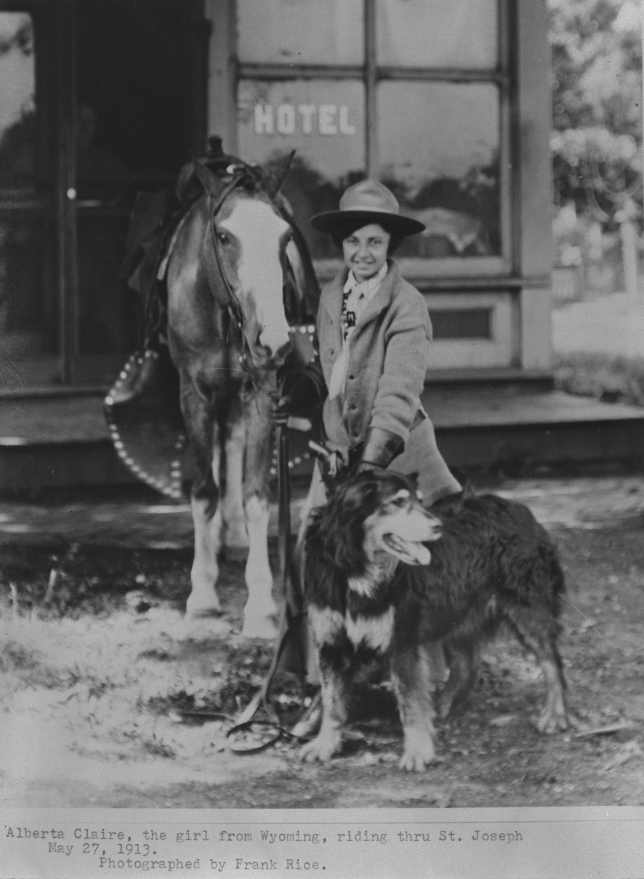 Photograph of Alberta Claire and her traveling companions, taken in St. Joseph on May 27, 1913 by Frank Rice. Part of the Champaign County Historical Society photograph collection.

Sometime in late 1910, Claire took on a wager that made her into a national celebrity throughout 1911-1913. The history behind the wager is a bit cloudy, but it seems a wealthy cattle rancher (or perhaps two betting against each other) bet Claire that she could not ride a horse from Buffalo, Wyoming to Buffalo, New York alone. If she accomplished this hefty task, she would be awarded $100 and a 3,800-acre farm. As time passed the wager changed, first to a $1,000 reward, and then a $10,000 reward. The number of acres also changed from one number to another and then eventually newspapers only reported on the $10,000 reward.

The specifics of her travels were also unclear. At first, it seemed she was only bet that she couldn’t do the trip alone with just her dog and horse, but as time passed this morphed into a different wager where she was bet she could not do the trip while riding a horse astride, rather than on a side-saddle. There were also changes in the direction she planned to take. Initially, newspapers reported that she needed to travel from Buffalo, WY to Seattle, San Francisco, Los Angeles, New Orleans, Washington, and then finally Buffalo, NY. Her path ultimately veered north, and it is unknown whether or not she made it to New Orleans. 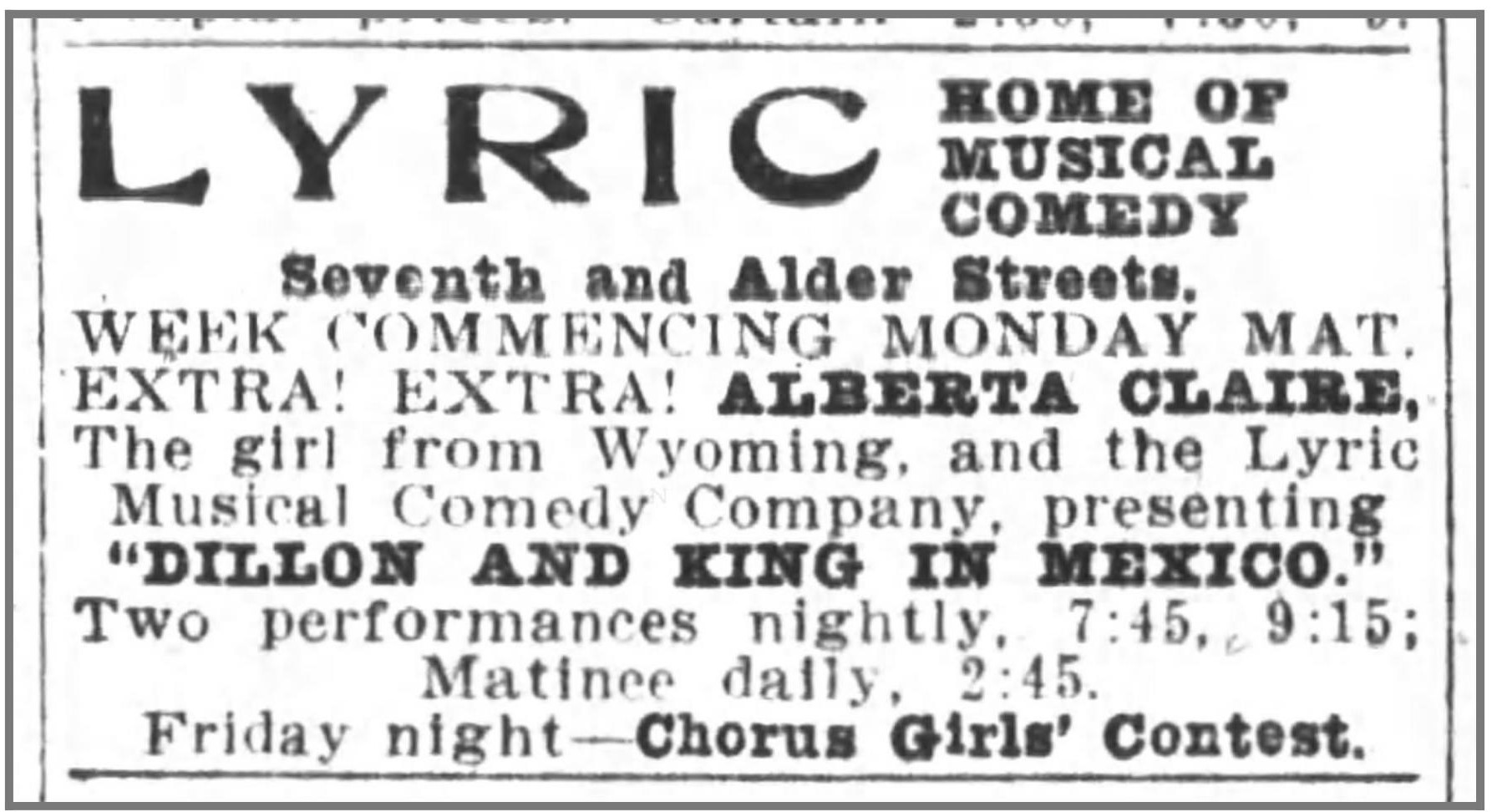 Advertisement from the Oregon Daily Journal.

When her trip began, she made it from Wyoming to Washington state and then down to San Francisco in just a few months, but rather than continue her journey westward, she stayed in California through the Summer and Fall earning money (presumably for her trip) in Vaudeville shows the entire time. In November of 1911, she began her trip in earnest and was already in Yuma, AZ.

Advertisement from the Albany Democrat.

Within just three short months she made her way through the west, up through the middle of the country, and into Illinois. By this time, she was a national celebrity and very well-known for her infamous $10,000 wager to travel across the nation alone. She had taken to writing to towns a few days ahead of her visit so they could prepare for her arrival. She was often greeted by a welcoming party and provided free lodging.

By mid-February 1912, Claire made it to Danville and planned to visit Champaign County to visit her friends, the Yeazel family, in St. Joseph. She also likely wanted to get to Champaign-Urbana to greet fans and accept any gracious gifts city folk may have to offer her. During her trip from Danville to St. Joseph, Claire was caught in a big snowstorm and was lost with many news publications presuming the worst. She was eventually found safely sleeping in a barn outside of St. Joseph and then stayed in a local hotel until the storm cleared, but her harrowing couple of days were national news.

After leaving Champaign County in February 1912, she continued her journey east and made it to Buffalo, New York in April. There she was greeted by a large crowd and former President Teddy Roosevelt. 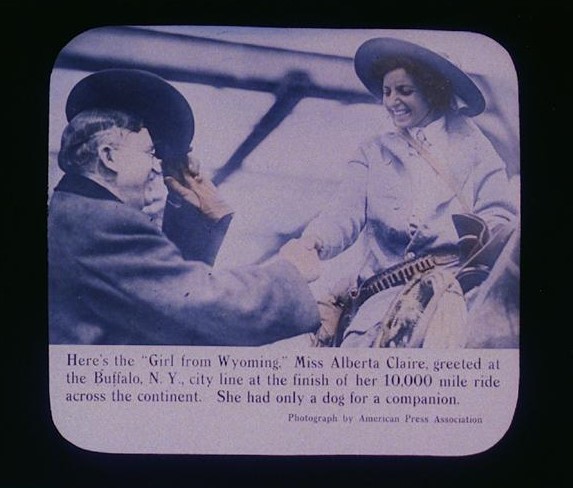 Photograph of Alberta Claire and Teddy Roosevelt by the American Press Association.

After Claire won the wager, she stuck around the east coast to travel and see the area. In 1913, she was back in the Midwest and made her way to Champaign County again. As usual, Claire wrote ahead so the local papers could publish her visit. According to Claire from the May 26, 1913 issue of the Champaign Daily News:

“This time I am headed west, going to Los Angeles, Cal., astride my cow pony ‘Bud’. I’ll arrive in your city of Champaign Tuesday to stay overnight. I completed my cross-country ride on April 6, 1912. It was during that ride I came through your city before and got caught in St. Joseph in that terrible blizzard of February 1912. The kindness of the people will always be a pleasant memory to me and a still brighter one is the friendly greetings which they give me now that we meet again.”

On a personal note, this is my last blog post for the CCHA. It has been an extraordinary pleasure working for the archives and I truly hope I was able to bring some fun and interesting history into your home and hearts through this blog. Like Alberta Claire, the kindness of the people from Champaign County will always be a pleasant memory to me. Champaign County has a rich and fascinating history and it was an absolute honor for me to tell you a little more about our past over the past few years. If you see my name in a museum or archives somewhere in the future please stop, say hello, and tell me how things are going in Champaign County. Cheers.