A Look Back at the New Chanute Youth Center

On Thursday, March 18, 1982, ground broke on construction for the new Youth Center at Chanute Air Force Base. The Youth Center was built to provide programming and activities for children ages 5-18 of active and retired base members.

Architects from Pace and Associates of Chicago, IL, designed the new building and it was erected by Marco Construction Company of Carlinville, IL.  The cost of the new building was approximately $866,000 and 10,356 sq. ft. The new building featured (among many other spaces) music rooms, a game room, an arts and crafts area, and the much anticipated multi-purpose room/gymnasium. The multipurpose room allowed the Youth Center to offer sports that took up more space, like soccer.

Take a look at the Youth Center’s calendar for their opening month! This calendar was printed in the April 1983 edition of Free Time, Chanute’s recreation magazine. View the entire digitized magazine here. 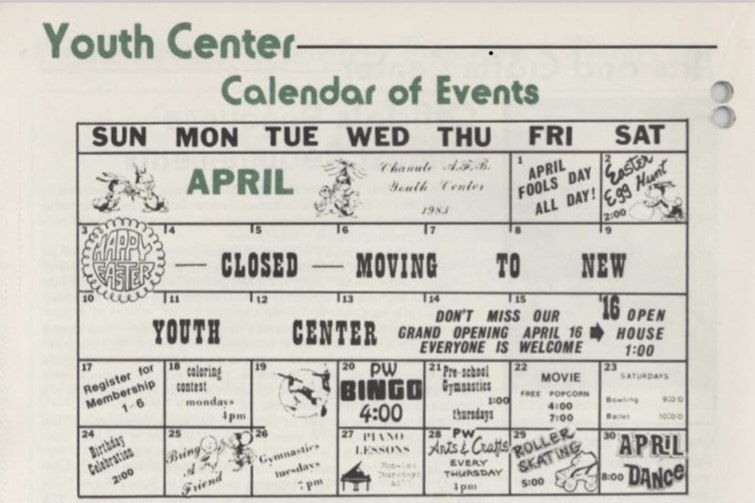 A little over one year after construction started, on Saturday, April 16, 1983, the Chanute Air Force Base welcomed Chanuters and the general public to the Grand Opening Ceremony of the new Youth Center. The open house began at 1 pm with a ribbon cutting ceremony, performance by the Band of the Midwest, and other planned events throughout the day. The celebrations wrapped up with a teens-only dance with DJ Robert Thomas of “Bad Productions”. Read more about the opening events on the front page of The Pacesetter.