Behind the Scenes: Collection Management, part 2

Follow along with Mary Pedraza, Archives Apprentice, as she tackles rearranging the special collections storage space at the Library Annex. 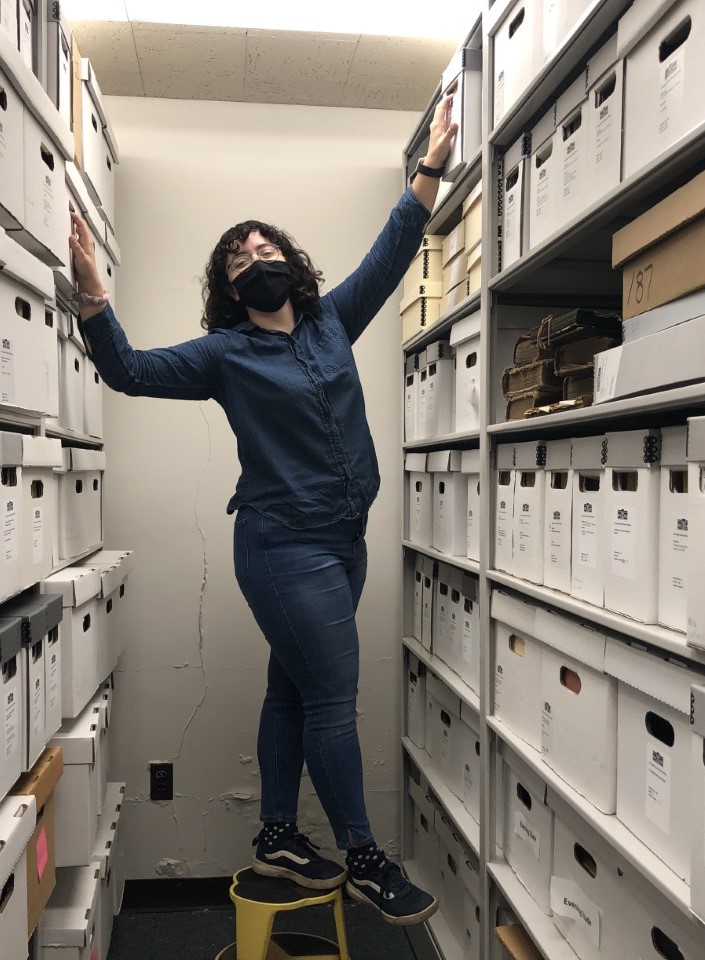 Last month, I gave a preview of the project I planned for my independent study at the Champaign County Historical Archives. I am seeking to position my work with the collections storage plans among standards within the archives field, and even in our community. Two months have passed and let’s see what I have done.

By the end of February, I had done a preliminary overview of the Library Annex (our storage location next to the library). To begin my project, I was given a list of the collections, box numbers, and last listed location of these boxes. I took that list and checked its accuracy. I spent a few days, going into each section of the Library Annex and looking at each box on each shelf and comparing them to the list. For those that were accurate, I checked it off. For those boxes that were not on the shelf, but listed as being there, I gave it an X and tried to find its actual location. And for boxes I found on the shelves that were not listed in that location on my list, I simply wrote them down on a sheet of paper.

After doing the first run through, I created a spreadsheet of the unidentified and missing boxes using Excel. You would be surprised how much of my project became editing an Excel document. You would be even more surprised to know how integral spreadsheets are to archiving and how much is written on the subject [1]. From the list of boxes I found, I simply used the Excel function Ctrl+F to work my way through it. I identified and located almost all of the collection boxes, with only a few stragglers. Notably, no box nor collection is lost in the CCHA, just not located. As we saw last month, some archives struggle with losing boxes, but in an institution as small as this we thankfully have not!

The way that CCHA originally labeled their boxes was to give each box a number: 1, 2, 48, 653, etc. This number associated the box with an inventory or accession record. When a collection was fully processed and placed into acid-free boxes, the individual boxes and box numbers were discarded. The special collection is then given a collection number. But the majority of our special collections, are still in their original box with their original number and we keep track off of this simple number written on the box in sharpie or pen. Well-established standards suggest a bit more advanced labeling technique, like writing out the collection name and number, or placing a label with this information on it [2]. I plan to put proper labels on every box at the end of my project, however the original numbering system perseveres in CCHA.

Nonetheless, these numbers saved my life. I am grateful CCHA kept these box numbers, because this was the only way I could identify and locate most collections. Some archives are too quick to abandon the outdated system of their institutions and it often causes them to lose intellectual control. They erased, scratched out, and discarded before they were ready. By the end of my project, CCHA will be ready to move forward with an updated system, but for now the numbers are the backbone of our collections.

This month was also my moving month. Many of the collections are less than five boxes, yet they were scattered throughout our storage space, often placed wherever they could fit. So my first task was to reunite these small collections. It was often as simple as reuniting the one or two outlier boxes with the rest of the collection. Surprisingly, there were many instances where boxes were pulled to be used for research, and then they never made their way back to the shelves afterward. I found several boxes sitting in the back of our reading room, waiting to be brought back to the Library Annex. That was where much of the satisfaction lay this month, putting things back where they belonged!

In addition to putting things where they belonged, I realized the need for a checkout system in our Library Annex. Often, boxes are pulled for a patron and then remain in the reading room waiting for a return trip to the Annex. Keeping a record of the boxes' movements allows us to track the boxes and preserve their physical location in the Annex. I created a simple form for staff to fill out and leave on the shelf when they removed a box.

I was first introduced to this idea in undergrad when the archives I worked at was shelf reading their collection and wanted to ensure that the boxes did not move around without documentation. They, too, struggled with controlling the movement of collections within their storage space. The form requires the collection name, how many boxes are removed, the date, and the staff member's initials.

These simple pieces of information are integral to keeping a record of a box's movements. I found myself asking several Archives staff members if they had seen a box somewhere or if they had taken the box themselves. Knowing who took the box narrows down the search pool. Knowing when it was taken helps us track the length of its removal and if it is still needed in the Archives reading room or if it can be returned. And of course, we need to know what was taken because I experienced many instances where I knew a box was missing, but not which one exactly. Ideally, with this simple sheet, misplacing boxes in the CCHA will be eradicated, and all the hard work I put into organizing the Library Annex will be maintained!