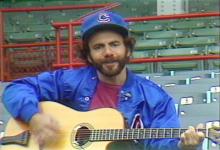 I'll be watching Game 7 tonight, hoping, hoping that the Cubbies manage to pull off a miracle and win that World Series.  Grand slams and strikeouts aside, one of my favorite moments of the series so far was after Game 5 when fans stuck around after the win at Wrigley Field to sing Steve Goodman's song "Go Cubs Go."  You could hear that chorus from a mile away, as evidenced by this clip, recorded by a fan.  Steve Goodman, Chicago songwriter and folksinger (best known for "City of New Orleans"), was a big-time Cubs Fan.  "Go Cubs Go" is no masterpiece - "Even the smallest child or most inebriated fan can pick it up and join in on the chorus," says the Forward,  but it's the perfect fan sing-a-long.  That song and the "Dying Cubs Fan's Last Request" are both on "No Big Surprise: The Steve Goodman Anthology".  Hopefully, we'll be singing the victory song tonight.