Flags have been in the news lately, and the nation has been contemplating the power of symbols to unite and divide.  One Champaign County resident, James Cadle, understood this dichotomy perfectly and in 1970 created a flag for the Earth, free from all “political, cultural, or geographical commitments,” truly a flag for all humankind. 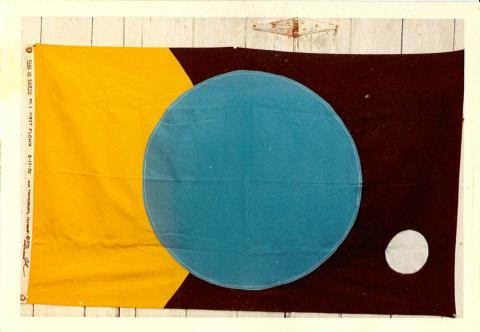 The Flag of Earth depicts very simply the yellow Sun, the blue Earth, the white Moon, and the blackness of Space.

The genesis for the flag came from the Earth Day environmental demonstrations in 1970 and followed the debate of which flag should be placed on the moon as part of the 1969 Apollo 11 mission. Cadle remembered he “got up one morning… and the idea came to me that that this planet really needs a flag.” A few weeks of design work plus trips to the local fabric store, and the Flag of Earth first caught breeze on May 17, 1970.

Cadle copyrighted his design and launched the Flag of Earth Co. International from his home in St. Joseph for the sole purpose of making and distributing the flag. Since its inception in 1970, the Flag of Earth has been flown at The North American Astrophysical Observatory (NAAPO), Big Ear (Ohio State University Radio Observatory), the Wright State University Astronomy Club, Parkes (Australian National Radio Observatory), at various SETI institutions, and even in Second Life at Space Frontier Island. 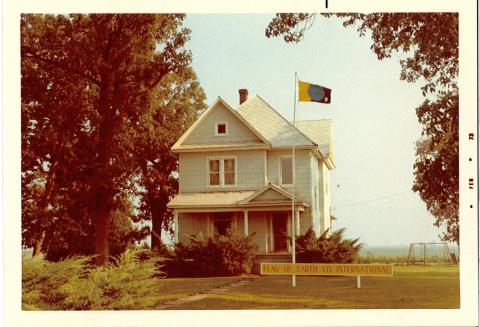 James Cadle passed away in 2003 and placed the design in the public domain. Now, the North American Astrophysical Observatory (a not-for-profit, volunteer organization) with the support of Cadle’s family has taken over production of the flag.

The Champaign County Historical Archives has records from the Flag of Earth Co. International including 2 flags, certificate of copyright, newspaper clippings regarding the flag, and pictures of the flag flying at Cadle’s home in St. Joseph.