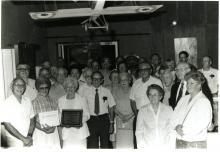 This sense of community did not end once one left the Air Force. The U.S. government created the Retiree Activities Program to support those transitioning back into civilian life and their families. The records from Chanute describe a program that educated individuals on their rights as retirees and created a space for retirees to continue contributing to Chanute Air Force Base. While the members of this program may have been retired, they were not slowing down! In 1987, the program collected 2,500 volunteer hours through its various events and outreach programs, from helping other retirees with transportation around the Champaign County area to hosting annual Christmas parties and acting as foster grandparents for children on the base. These individuals engaged with every area of life at Chanute.

Always looking for ways to improve life in their community, the Retiree Activities Program continued to fundraise and support the base until its closure. They fought very hard to impart Chanute's importance on a local and national level when closure threats began. They organized letter-writing campaigns and circulated petitions. Once the base was closed in 1993, the retirees continued to support one another by helping members receive access to their benefits and creating the Octave Chanute Aerospace Museum to help preserve their legacy.