From the Collection: The Counties of Great Britain - A Tudor Atlas

Have you ever searched in Local History Online and discovered a book with a “Q” as part of the call number? The “Q” in the call number alludes to the book-sizing term, “Quarto.” Our oversized books are housed separately from the rest of our print collection, along the southwest corner of the reading room.

While browsing through our Q book section, I discovered a beautifully illustrated book of plats called The Counties of Britain: A Tudor Atlas by John Speed. It was published in association with The British Library in 1988 and includes thorough introductions by Nigel Nicolson and Alasdair Hawkyard. I was excited to peruse this book. Early Modern England was my area of study in graduate school and I do not get many chances to explore that time period and locality working here in the Champaign County Historical Archives! 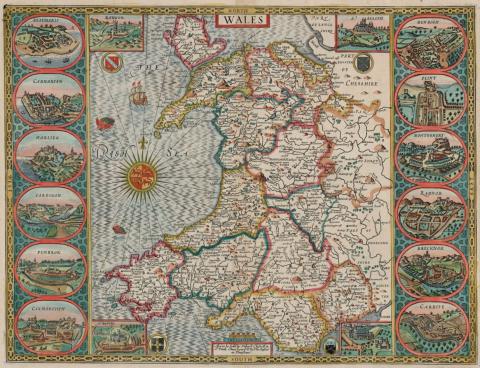 A little background on the mapmaker and the original book’s significance. John Speed (1551/2 – 1629) is one of the best known English mapmakers of the Early Modern period. He started his career as a tailor, but due to his masterful scholarship on the history of Great Britain, he attracted the attention and patronage of wealthy individuals. The tailor-turned-scholar focused his attentions on cartography and in 1611 published The Theater & Empire of Great Britain. This publication was the first of its kind: a detailed pictorial atlas of Great Britain. It was the first atlas to encompass all the counties of Britain. 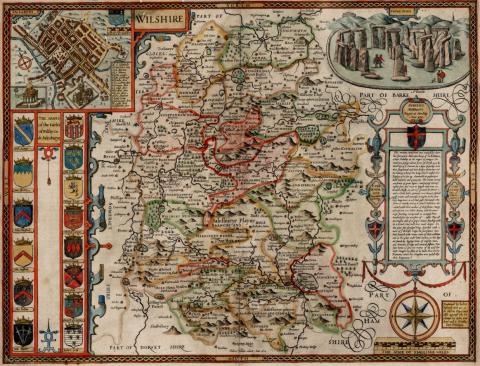 The functionality of Speed’s atlases is apparent in the depiction of cities and villages, topographical information, carefully squared-off county borders, and land features (rivers, forests, hills, etc.) Since each double-page in the atlas had to be uniform in size, Speed saw to it that even smaller counties had fully illustrated maps by including heraldic designs, royal portraits, depictions of historical battle sites, and inserts of notable architecture. The work was innovative and precise. 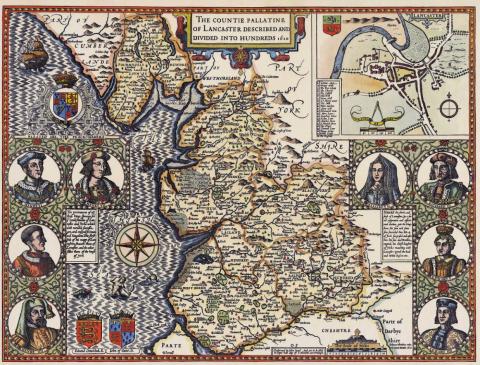 For 150 years, Speed’s maps were considered the foremost achievement in British cartography. Within 10 years of its printing, the atlas was selling for no less than 40 shillings. According to The National Archives of the UK currency converter, 40 shillings in 1610 is equal to the sum of about 250 pounds or $310 (US) in today’s currency. Speed also created maps of his current-day France, Italy, Spain, Africa, and China. 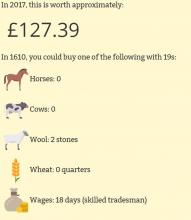 To view The Counties of Britain and other books in our collection, visit us at the Champaign County Historical Archives of The Urbana Free Library!

Side note: The currency converter is totally worth playing with! It not only converts currency, but gives you a graphic that shows which goods and how many days’ wages your sum would have equaled during that time period. It would take approximately 36 days wages for a skilled tradesman to pay for a copy of Speed's original atlas.