Changing the Code on Campus Affairs

Those who have conducted archival research before know that it can be a winding, circuitous process. It is all too easy to get diverted by the information that catches your eye but is unrelated to your true research goal. However, these research rabbit holes may ultimately lead to a brand new perspective  - or a blog post! One such sidetrack happened to me as I investigated the Champaign County Women’s Political Caucus for the CCHA’s’ new exhibit, “From Homemaking to Municipal Housekeeping: 20th Century Women’s Clubs in Champaign County.”

The Champaign County Women’s Political Caucus (CCWPC) was a political organization for women that operated during the 20th century. It was an affiliate of the Illinois Women’s Political Caucus, which belonged to the country-wide organization called the National Women’s Political Caucus or NWPC. According to documents in the CCWPC collection, the NWPC was a politically, economically, and racially diverse organization “dedicated to the election and appointment of qualified women to political office.” It was especially supportive of causes like government funding for childcare, the Equal Rights Amendment, reproductive health, and more. The NWPC still exists today, and the Illinois chapter is named an “emerging chapter” on its website.

In 1987, Terry Cosgrove, Political Action Coordinator of the University of Illinois at Urbana-Champaign’s Gay and Lesbian Illini (GLI) club, wrote the then chair of the CCWPC, Diana Lenki, with a plea. Cosgrove asked Lenki to pen a letter to the University of Illinois’ Board of Trustees, Chancellor Thomas Everhart, and President Stanley Ikenberry to support a movement to revise the University of Illinois’ Code on Campus Affairs. GLI members were fighting to have “sexual orientation” explicitly listed as a protected class in the University’s statements on discrimination. This push came amid the homophobia of the AIDS crisis in the United States. Lenik wrote a letter in support on behalf of the CCWPC, joining Illinois politicians and the Student Government Association of UIUC to urge university leadership to adopt a new policy. 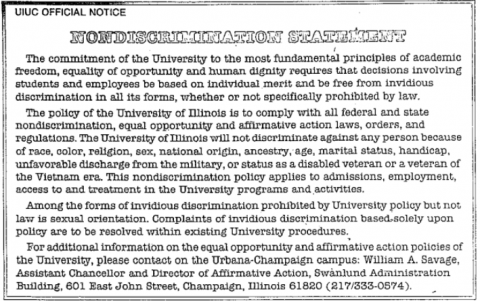 The Nondiscrimination Statement published in The Daily Illini a few months after the Board of Trustees’ vote. Notice that “sexual orientation” is not included with the other protected categories but is singled out in the third paragraph: the Daily Illini, August 27, 1987, page 32.

After the campaign by Gay and Lesbian Illini and their allies, the University of Illinois’ Board of Trustees voted in May 1987 to accept a change in campus policy by UIUC’s chancellor and president that prohibited discrimination based on sexual orientation. According to UIUC’s website, a new nondiscrimination policy was officially put in place in September of that year. Furthermore, the revised code was published in the UIUC newspaper, The Daily Illini. However, this was not the end of the story - Gay and Lesbian Illini continued campaigning due to the perceived ambiguity and limitations of the Board of Trustees’ action. According to an article in the Daily Illini,“‘The provisions made for us are not identical to those made for other minority groups,’ GLI co-president Kristina Boerger said.” Students were also unsure how this policy would be enforced, leading to questions about its effect on Greek life, research, and more. For example, in the editorial cartoon below, a representation of the Senate Student Association (on the right) asks UIUC’s interim chancellor Morton Weir (left) to clarify the new nondiscrimination policy. 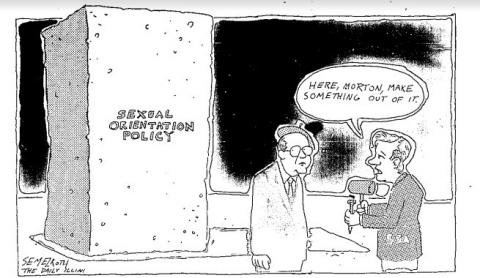 In this editorial cartoon from The Daily Illini, a representation of the Senate Student Association (on the right) asks UIUC’s interim chancellor Morton Weir (left) to clarify the new nondiscrimination policy. The Daily Illini, September 21, 1987, page 17.

At the end of my research rabbit hole, it was unclear how or if the CCWPC was involved in further campaigning on this issue. However, as of 2020, UIUC’s nondiscrimination policy explicitly outlaws discrimination based on sexual orientation and prohibits prejudice against other protected categories like gender identity, pregnancy status, and genetic information. While I ultimately did not find enough information in my short search on the CCWPC to add them to the exhibit, their story still lives on in this segment of University history.