From 1983 to 1992, Donald Weckhorst worked tirelessly to complete an impressive pictorial history book about Chanute Air Force Base. Along with the over 300 people who donated records for the book, Weckhorst also reached out to a young self-taught artist named Norine Welk to do some drawings for the book. Welk drew ultra-realistic landscapes and portraits using ballpoint pens and colored pencils on cream-toned paper.

She started drawing at the age of 6 after breaking her leg. Her grandmother brought her art supplies to pass the time and her talent was immediately noticeable. Welk started by drawing insects, and then moved on to other natural subjects. She analyzed things she saw in her mother’s garden and drew them later from memory. As Welk became older, her focus shifted to patriotic drawings. These included drawings of Buffalo Bill Cody, President Ronald Reagan, Native Americans, and American Air Force planes. Her drawings took approximately 20-40 hours to complete. The Reagan portrait in particular took about 35 hours and was created by Welk watching television appearances of Reagan very closely. 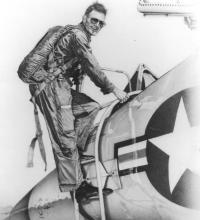 By the 1980s, the Sacramento native lived in Shiloh, IL with her husband, an airman at Scott Air Force Base. Weckhorst invited the 21-year old Welk to nearby Chanute in 1985 after seeing her work. At the time, she had drawings on display at the Silver Wing Museum at Mather Air Force Base in California and was an award-winning Air Force artist, having sent her work to numerous Air Force art contests. Weckhorst had two major projects for Welk: to reproduce various instructor and master instructor badges from Chanute and reproduce pictures of Chanute Airman James Andrews, who flew Jennies at the base in the 1910s and later jets during WWII.

Working for free, Welk immediately started on these projects. The February 1, 1985 issue of The Pacesetter shows Welk drawing different badges, along with some of her drawings of Native Americans. A year later, she was featured again in The Pacesetter, alongside James Andrews holding her drawing of him. Despite her beautiful work, none of the drawings made it into the pictorial history book. Unfortunately, the Archives does not have any Welk originals, however we do have some reproductions. Please enjoy Welk’s lost Chanute pictorial history drawings. 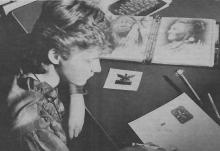