Ellis Island opened on January 1, 1892. In honor of that occasion here is a blog we posted in 2013 about the history of the island and tips for researching an ancestor's immigration story. Happy New Year, Everyone! 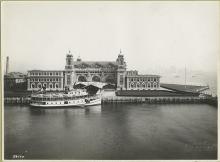 We all learned as school children how our immigrant ancestors came to America through Ellis Island. The real story about where and when immigrants entered the United States is much more complicated than the story we grew up with. Ellis Island was a New York gateway for the arrival of U.S. immigrants from roughly 1892 to 1924. Although it was by far the largest port of entry and millions arrived during that time, it was one of many ways to enter the United States.

Starting in early Colonial times, ships arrived at numerous ports along the North American coast and immigrants unloaded straight onto the docks. Until 1820, passenger lists were not required, although some have survived. In 1820 new laws required that official passenger lists were administered by the customs office of each state. Ships were expected to fill out standardized forms, which varied from state to state, declaring all their passengers just like any other cargo.
In 1855 New York State opened the first U.S. immigrant receiving station at Castle Garden, an island immediately off Battery Park at the south end of Manhattan, in an effort to protect people from the thriving business of exploiting thousands of newly arrived immigrants. This station was open until 1891. 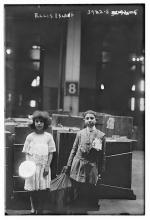 But your ancestor may have come into the U.S. through any of the several major and minor ports in that time, or by land. For example, in the early years of the exodus from famine-tortured Ireland, most of the Irish came into Canadian ports from England and crossed into the U.S. by land. No border records were kept at that time. Official Federal control of immigration began when the Office of Immigration was formed as a branch of the Treasury Department in 1891.

The year-and-a-half transition from state administered Castle Garden to federally controlled Ellis Island, was the time of the “Old Barge Office,” a long-gone building on the south end of Manhattan. It was used again between 1897 and 1900, after the big old wooden Ellis Island building burned and a new brick facility was erected. Immigrants were not processed on the island during World War I but operations there returned to normal in 1920. The Ellis Island facility was no longer used as a receiving station after the visa system was instituted in 1924. After Ellis Island was established, other federal processing facilities were opened at other ports, for example San Francisco and New Orleans.

According to the history and timeline at EllisIsland.org, the peak immigration year was 1907, when 1.25 million people were processed through the center and the all-time high was April 17, when 11,747 people were processed through the facility in one day. The total number of people who actually did immigrate through Ellis Island is a debatable topic. There are difficulties making an ultimate count. For example, those who repeatedly traveled to Europe and returned may have been counted multiple times in official tallies. 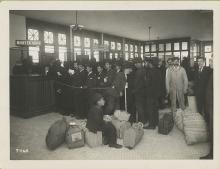 And what about the ubiquitous Ellis Island name change? Apparently it wasn’t even possible because of official protocols. Actually. It was far more likely to be a decision made by your ancestor soon after arrival. To search for your ancestor you must know the name, as recorded by the clerk, by which your ancestor was known in their country of origin. That is how the forms were filled out at the port of origin and used through the arrival process.

You can learn more about the process of tracking down an immigrant ancestor’s entry in to the United States in the book, They Came In Ships, by John P. Colletta, a former instructor of the topic at the National Archives. Many existing passenger lists are searchable with the library subscription of Ancestry.com. All of these resources are available in the Champaign County Historical Archives.