On this day, September 30th, twenty-six years ago Chanute Air Force Base closed its doors along with several other Air Force bases across the country. Even though Chanute witnessed many changes in the United States, from the Great Depression to the technology boom in the 1980s, 1988 was the beginning of the end of an era for Chanute. It was a transition period in the United States as the Cold War came to an end and Americans were encouraged to look forward to a time where military force was no longer necessary. As plans unfolded, many people feared the effect Chanute’s closing would have on the Rantoul community. For those who are just learning about Chanute today, it is difficult to imagine how much an impact the Base had on the day-to-day life in Rantoul. However, when you compare the photos here, one from the 1917-1930s and the other from the 1990s, it is clear to see that when Chanute Air Force Base evolved so did the surrounding area. When the Base grew and expanded its influence so did local businesses, schools, and community groups. 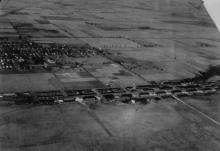 Looking through the documentation and testimonies within the Chanute Collection, it is obvious how every area of life was influenced by the Base’s closure. 975 civilian employees faced relocation in 1993. This number did not include their spouses and families who helped fuel Rantoul`s schools, businesses, and tax revenue as well as, and perhaps more importantly, a sense of community. From the young to the old, everyone felt the impact of Chanute’s closure even if they had no direct connection to the Air Force. The News Gazette reported that Rantoul’s student population would decrease by an estimated 234 students after the base closure leading to an elimination of 15 to 20 teaching positons in Rantoul’s schools. Business owners were quoted “it’s a matter of surviving” as they let go of their employees and closed locations as their consumers were forced to relocate.

The consequences of the Base closure not only effected active employees and Air Force men and women but also a reported 2,800 retirees who were promised healthcare and commissary privileges that Chanute facilities helped support. Without the Base, many retirees feared they would no longer receive benefits and support forcing them to travel long distances to other Air Force locations. Many different areas in the community were forced to make adjustments as life drastically changed with the closing of Chanute.

It is hard to predict what life in Rantoul might be like if Chanute did not honor its last graduating class on July 1st 1993. Chanute not only supported the education of honorable men and women throughout its 75 years of existence but also the community that helped serve the base in many different ways. Even though the physical site can be sad reminder of what was, the records and histories of the Base continue to live on through the dedication of Octave Chanute Aerospace Museum until 2015 and today at the Champaign County Historical Archives. While this time in Rantoul’s history was filled with apprehensive, it is reassuring that the work many individuals accomplished in the past continues to exist and matter in the present.