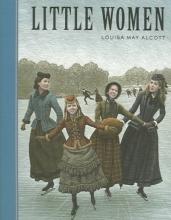 Since its original publication date, Little Women has been adapted into films, television series, two Anime series in Japan, a musical on Broadway, and even an opera. It was recently adapted into a television mini-series for BBC, broadcast from December 26-28 2017.
Do you want to reread Little Women, or maybe watch one of the film adaptations? Check out all things Little Women here in the catalog.

Do you want to learn more about Alcott? Check out the following articles:

Alcott: 'Not The Little Woman You Thought She Was’

10 Little Facts About Louisa May Alcott