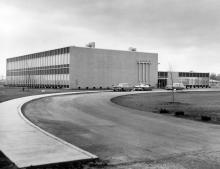 Recently, the community has been discussing the property of the Dart/Solo Cup plant located on the corner of Washington Street and Lierman Avenue in Urbana, former home to Urbana’s Magnavox plant. Check out the links below to Tom’s Mailbag from the News-Gazette to learn more about the conversation: 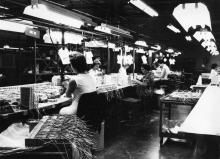 by the Archives, that the former Magnavox plant is still very much a subject of interest in our community.

Magnavox Co. operated a research, development, and manufacturing plant in east Urbana from 1956-1972.  The company developed and manufactured complex electronics for commercial and government use. Consumer products made by Magnavox during that time period included parts for televisions, radios, and the minicard system, a hybridized version of microfilm and the IBM filing system. In the commercial sector, Magnavox sold complex office machinery, like photofax machines. 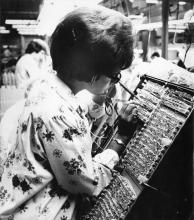 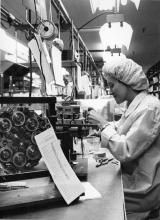 In addition to consumer products, Magnavox held “a number of government contracts to work on ‘classified’ materials” including land mines, field radios, impulse detectors, and fusing and arming devices for missiles such as The Hawk, La Crosse, Nike, Hercules, Nike-Zeus, and Red-Eye during the Vietnam War.

During its first two years in business, the company doubled its workspace (from 60,000 square feet to over 110,000 square feet) its number of employees, creating jobs for over 1,100 people, most of them local residents. 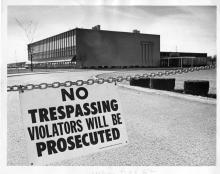 The Urbana plant’s demise was a result of an economic downturn, and the lack of necessity for new Defense Department contracts after the end of the Vietnam War. By spring 1971, talk of the Magnavox plant’s closing began to circulate heavily throughout the community. In late May 1971, Magnavox announced its plans to phase out the Urbana facility over the next year due to “lack of government contracts and slumping commercial sales.” After reaching its peak employment of 2,400 employees in 1969—a result of both the U.S. space program and government contracts during the Vietnam War—and adding another 60,000 square feet of workspace in 1968, the plant reduced its workforce to a mere 200 employees by December 1971. 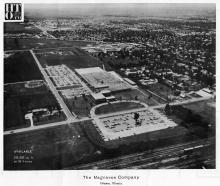 Magnavox’s impact on the local economy was substantial. In the five years that proceeded its closing, Magnavox contributed:

$55.2 million in salaries
$3.25 million in locally purchased manufacturing materials
$1.2 in telephone and telegraph bills
$670,000 in other utility costs
$60,000 in property taxes

Additionally, Magnavox contributed $125,000 in goods and services to local schools and charities not including the donation of an $80,000 data storage and retrieval system to Parkland College.

The property at 1505 East Main Street, Urbana was purchased by the Solo Cup Company in early 1971 and began production two years later. A press release from the Magnavox corporate office in 1971 states, “When it became apparent that the Company could no longer justify operating the facility, Magnavox made sure that the plant was sold to a good prospective employer for the community.” The Solo Cup Company, purchased by Dart Container Corporation in 2012, still operates from the plant in Urbana.