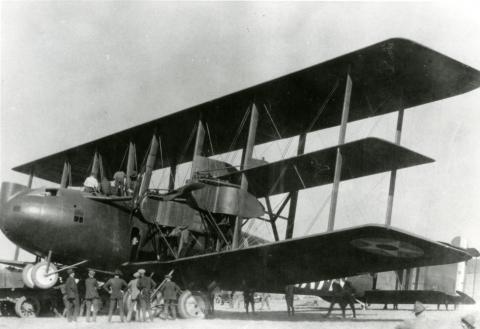 Only one Wittemann-Lewis XNBL-1 “Barling Bomber” was ever built. At the time, the Barling Bomber was the world’s largest plane. According to the November 15, 1923 issue of the Rantoul Weekly Press, the plane was powered by six Liberty motor propellers (four tractor types and two puller types), 2,000-gallon gas tank, and had a top speed of 75 mph. 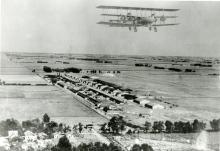 It landed at Chanute Field on October 10, 1923 to be used in the motion picture, “The Making of a Man,” the name was later changed to “The Sky Trailer.”

The plane, created by Walter H. Barling, a British designer and its namesake, was considered largely a failure due to its high cost of manufacturing, slow top speed, and modest range with a full-bomb load. However, aspects of this mammoth plane can be seen in our planes of today. The use of dual wheels under the nose of the plane to keep it from pitching too far forward during take-off, its 10-wheel adjustable landing gear with oleo struts used as a shock absorbers, and special materials in the fuselage to help protect the plane and crew from anti-aircraft were quite futuristic and forward-thinking at the time of the plane’s conception.