The Flatiron Building, gone but not forgotten

The Flatiron, designed by Joseph W. Royer, was built in 1906 at 302 West Springfield Avenue in Urbana. It was the tallest building in Urbana at the time. Over the years it housed the Elks Lodge, law offices, the Veterans Administration Ooffice, Illinois Department of Public Welfare, Flatiron Department Store, and even Royer's architecture office. 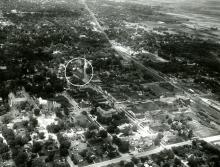 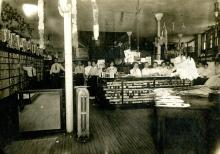 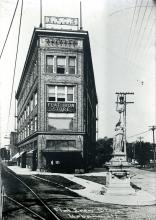 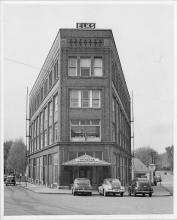 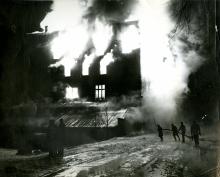 On March 11, 1948, the building caught fire. Flames were first seen about 11:30pm, but the building had been burning for perhaps as long as an hour or more. Losses were estimated at $400,000 total. The Elks Lodge owned the building at the time. Their estimate building loss was $125,000, only $50,000 of which was covered by insurance. In addition, countless legal documents and tax records from the various offices within were destroyed. The library of Henry I. Green & Associates, one of the largest law libraries in southern and central Illinois, was completely lost to the inferno. A heavy snowfall the night before protected neighboring homes against the rain of fire, as men stamped out flaming embers and smothered them with snow. 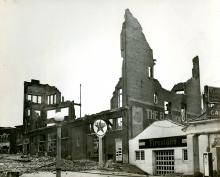 The Firestone Station garage, which was adjacent to the Flatiron Building, only suffered damage to its roof and is still standing today. The cause of the fire seems to be unknown, as it is not mentioned in any newspaper articles. If it had not occurred, Urbana would have a tall wedge-shaped building on its main street. I like to imagine what it might house if it were still there today. Local shops? Artists’ lofts? Probably law offices.