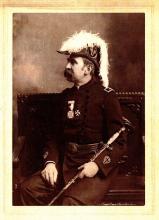 The photograph of the gentleman in the snappy hat above is John Nathan Beers. Beers was born in Cincinnati, Ohio, on October 24, 1849. In 1876, he married Izora Nebaker from Mahomet and had two children, Susan and Harry. Beers and his family came to Champaign in 1889, where he opened Beers and Davidson Real Estate and Insurance with James Wilson Davidson.

Beers was deeply involved in the Champaign-Urbana community, serving as secretary of the water company, and sitting on multiple boards, including serving as school board president. He was also an early member of the Western Star Lodge No. 240 A.F. and A.M. – a freemasons lodge still active today. Beers joined the lodge in the early 1890s, and went on to hold a variety of positions within the organization.

Beers died March 8, 1935, and was buried at the Riverside Cemetery in Mahomet, IL.