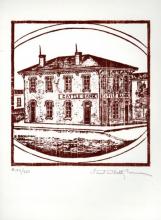 Every Christmas from 1946-1974, friends of Fred and Betty Turner received an original woodblock-printed card. Soon after Christmas, planning for the next year, the couple would choose a historical Illinois building or structure, take a photograph, then design, carve and print the image by hand. Their theme was “Illinois History through Woodblock Prints.”

Fred learned the woodblock method from his brother, an architect, who learned from a Japanese architect. Carving work was done under magnification using Tulip wood, a small chisel and specially designed wood-cutting tools. Most cards included inserts with detailed information about the historical significance of the depicted site. 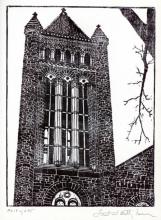 Fred H. Turner was very interested in Illinois history. He was born in Hume, Illinois and raised in Tuscola. In 1918 he moved to Champaign-Urbana to attend the University of Illinois and never left. In fact, he dedicated his life to it. As an undergrad student, he worked as a clerk for the Dean of Men, Thomas Arkle Clark. He then became the Assistant Dean of Men while earning an M.A. in Psychology and a Ph.D. in Education. After Clark retired, Turner succeeded him and in 1943, was named Dean of Students. He continued in that office until 1966 when he served as Chairman of the University Centennial Committee. He retired two years later, but continued working at his campus office, where others often asked advice or sought historical information about the University or the state. 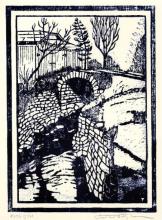 Along with establishing and organizing various offices, services, and functions to assist students as Dean, Turner was also active in fraternal and professional organizations, wrote free-lance articles for the Saturday Evening Post and the Chicago Tribune, and was associate editor of Banta’s Greek Exchange, a nationally circulated magazine for fraternities and sororities. He and Betty were married June 1,1924 and raised two daughters. With a life so full of activity and accomplishments, it is impressive that they found the time to create such beautiful works of art to gift their friends for Christmas.

Our Fred H. Turner Woodblock Prints Collection contains a total of twenty-nine different designs including the ones pictured. 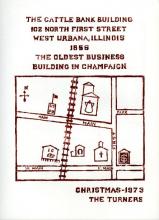 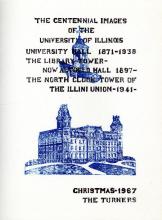 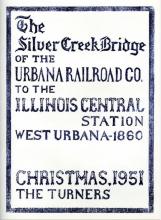