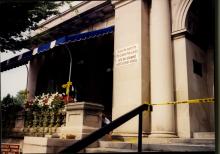 Not long ago, the Urbana Free Library celebrated its 100th year in the Samuel T. Busey Memorial Library building. It is a building that many people have enjoyed throughout the years. This includes in 1994, when the building saw a different kind of excitement. In the summer of that year, on Monday, June 20, the library was a popular summer destination just like it is today. At 1:28 p.m., a fire was reported in a basement electrical panel.

Susan Peters, a current staff member who worked that day, recalls hearing a loud noise. She said, “It sounded like a truck had run into the side of the building. After that, the power went out.” She was helping evacuate the children from the group reading room, and recalled that they didn’t want to leave the magic cards they had on the floor. Once the building was cleared everyone met up in the Busey Bank parking lot across the street. The fire department “responded to the scene 1 minute after the alarm sounded,” reported the News Gazette, 21 June 1994.

The estimated damage was thought to be $200,000; however it was not as extensive as initially thought. Books, archival material, and other materials were not seriously damaged in the fire. In total, the library was closed for a month. A sign was placed on the exterior near the Race Street entrance that said the library was closed due to the recent fire. During that month, patrons were told to keep hold of their items and late fees would be waived. 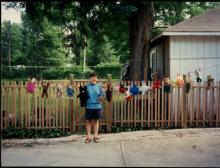 During the cleaning and restoration of the The Urbana Free Library many Urbana patrons went over to Champaign Public Library to check out materials. According to the News Gazette, July 13,1994 issue, “business increased so much that Urbana reference librarians and shelvers have come over to help in Champaign.” Humans were not the only ones who suffered from this event either. The stuffed animals from the children’s department had to be brought outside for some much needed fresh air. 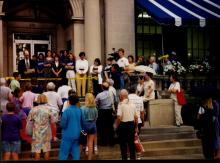 On the morning of Tuesday, July 19, 1994 the library reopened at 10:00 a.m., and as the picture shows, there was a big turnout for the celebration. The yellow fire tape was cut and the library was officially reopened to the public.