Today, both Champaign and Urbana are recognized as Bicycle Friendly Communities by the League of American Bicyclists. According to the organization’s website, ‘A Bicycle Friendly Community’ welcomes bicyclists by providing safe accommodations for bicycling and encouraging people to bike for transportation and recreation. Making bicycling safe and convenient are keys to improving public health, reducing traffic congestion, improving air quality and improving quality of life.’

In order to achieve this status, the cities had to submit applications to prove that they meet the required criteria. While the application process itself is long, the road to actually becoming a community that supports bicycling is even longer. Bicyclists and bicycle stores have existed in Champaign County for well over a century, but the first talk of designated bike routes seemed to have begun in 1973, a time when bicycling was particularly popular all over the country. It was then that the Champaign-Urbana Community Bikeway Committee made a proposal to the cities to mark streets for bicycle use. Other proponents of the plan included Housewives Involved in Pollution Solutions (HIPS), Students for Environmental Concerns (SEC), and the Family Housing Council of Orchard Downs.

The goal of the bicycle route plan was to provide a system of safe and convenient routes that tend to separate bicycle traffic from auto traffic. It needed to connect points and areas of the cities between which people regularly commute and serve all neighborhoods. Below is a map the Bikeway Committee prepared in 1973. 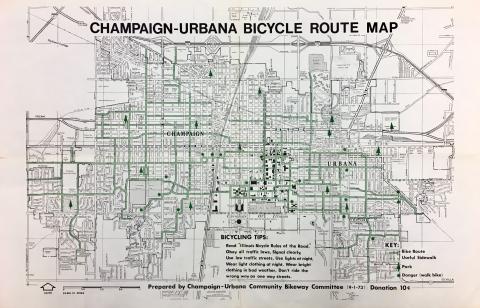 The groups also proposed barricading some streets to be used only for bicycle traffic. As a way to investigate the feasibility of doing so, California Avenue in Urbana was barricaded at Race Street and Lincoln Avenue for 30 days. Urbana Mayor Hiram Paley and former mayor Charles Zipprodt opened the experimental bike path with a bike race.

It turned out that many of the residents did not like the idea of their street being closed off to non-bicycle traffic, so that particular plan was not implemented. Instead, the cities designated bike routes with “Bike Route” signs, bicycle stencils on streets, and painted bike lanes. Safety measures were also taken by lowering speed limits on recognized routes, adding ramps to curbs in spots bicyclists tend to use, and changing storm sewer grates to a type that does not trap bicycle wheels.

Over the years new routes and lanes have been added to the initial plan, including off road multi-use paths. Thanks to local organizations, individuals, and the Public Works Departments of Champaign and Urbana, commuting by bicycle is an option for members of our community.

If you would like to see a more recent bicycle route map of Champaign-Urbana, you can pick one up at the Urbana Free Library or download one here.

There is also an educational video produced by Urbana Public Television specifically about bicycling in Champaign-Urbana. You can check it out at the Urbana Free Library or watch it on YouTube.

If you do decide that bicycling is a mode of transportation you would like to utilize, be sure to wear a helmet!

Engineering Department Miscellaneous Projects File 1 of 1975: Materials Concerning the Location of Bicycle Routes in the City of Urbana and Other Bicycle Related Projects and Activities, Series: City of Urbana Public Works Dept. Records