If you’ve ever done historical research at your local library or archives, you’ve probably heard of Sanborn Fire Insurance maps. But what are they exactly, and what type of historical information do they contain?

The first fire insurance maps appeared in London in the late eighteenth century as a practical solution to a very real problem. These maps helped insurance companies more accurately assess fire insurance liability. At a time when regulations were loose and cities were growing at an exponential rate, these maps quickly became an invaluable tool. 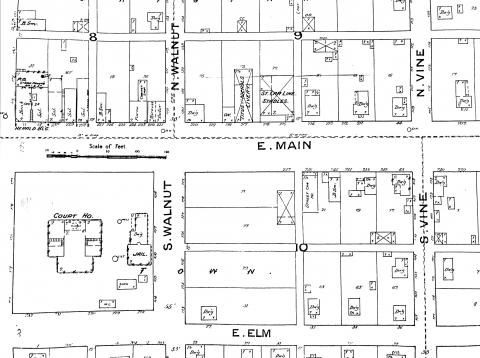 In 1867, the Massachusetts born surveyor D.A. Sanborn established the D.A.  Sanborn National Insurance Diagram Bureau in New York City. Over the next century, the Sanborn Company published maps and atlases of more than twelve thousand U.S. towns and cities.

Sanborn maps provide a wealth of information, including the size, shape, and outline of individual structures, property boundaries and numbers, and street widths. Since these maps were originally intended to show features that could affect a property’s vulnerability to fire, earthquake, or flood, they also depict railroads, pipelines, wells, and city dumps.

Throughout the late-nineteenth and early twentieth centuries, Sanborn maps were regularly updated as cities and towns grew and changed. For example, compare these two maps of downtown Urbana. The above map shows what the area looked like in 1887. You can see the court house, jail, and businesses along Main Street in great detail. Now look at the 1897 map below to see how Urbana changed. A small addition was built on the south side of the jail, and a large livery sprung up across the street.

The production of Sanborn maps reached its peak in the 1930s. At the time, a newspaper exclaimed that Sanborn maps described “the houses on every street in more than 13,000 U.S. towns and cities.”

Today, Sanborn maps are rarely used by insurance companies, having been supplanted by new technologies. However, these maps remain a vital source of historical information for researchers. 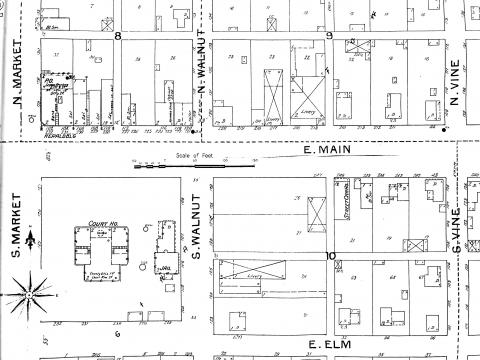 They can be used to trace back property ownership, and provide an unparalleled look at how the built environment evolved over time. In 2018, Sanborn maps remain the most frequently consulted maps in libraries!

The Champaign County Historical Archives has Sanborn maps of Champaign, Urbana, Rantoul, and Tolono dating back to 1887! So whether you are researching a historic home or property, or just love maps, consider visiting the archives and taking a look at our collection of Sanborn maps. You never know what you might discover!

Over 500 historical and current local maps, plat books, and atlases are available for research. The University of Illinois' digital collection of Sanborn Fire Insurance Maps includes maps of Illinois towns, including ones located in Champaign County.