Eat Your Way Through the Dungeon! 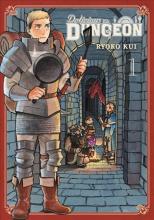 Do you play D&D?  Do you like comics?  Omg, do I have a manga for you.  It's called Delicious in Dungeon by Ryoko Kui.

Basically a group of adventurers TPK (total-party-kill aka everyone dies) while fighting a dragon.  Most of the party gets revived in town but one of them was eaten by the dragon, and the rest of the group have a small window of time to find the dragon again, kill the dragon, cut their friend out of it, and revive their friend (you can't revive somebody after they've been digested).

The problem is that the survivors have no money for food unless they sell their armor and weapons.  And then they'll die when they fight the dragon.  If they don’t buy food, they’ll starve before they get to the dragon.  Rock meet hard place.

Desperate, the party decides to eat the monsters they kill while fighting their way to the dragon.  What could possibly go wrong?

This manga is really funny and has plenty of monsters you'll recognize from mythology and other fantasy adventures.  Just don't read it on an empty stomach though or you'll be raiding the kitchen.