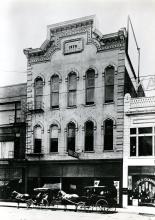 Champaign County is home to many historic theaters. From vaudeville venues to movie theaters, theater entertainment has deep roots in the culture of Champaign County.

One of Champaign’s earliest theaters was Eichberg’s Opera House built in 1872 on East Main Street. Located on the third floor of the building, Eichberg’s Opera House spent many successful years as a vaudeville venue, but was closed in 1895. The first free-standing theater built in Champaign was the Walker Opera House located on North Neil Street. The building itself was built in 1884 by the Armory Company, but was taken over by Walker and Mulliken in 1889. After years of vaudeville entertainment, the theater closed in 1914 and was replaced by the Hamilton Hotel. Today, the steakhouse Hamilton Walker’s stands in the historic space, paying homage to both the Walker Opera House and the Hamilton Hotel. 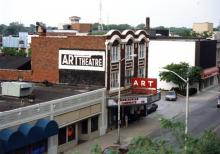 The Art Theatre in Downtown Champaign opened in 1913 as the Park Theatre. It was one of the first theaters built in the Champaign-Urbana area with the specific purpose of showing films. After the application of the Historic Preservation Commission, the City Council of Champaign designated the theater as a landmark in August of 1998. Today, the Art Theatre is known as the film aficionado’s homebase for avant garde film. The Rialto Theater opened as the Theatre Belvoir in 1915 inside the Russell Building on Church Street, right across from the Park Theatre. The venue showed anything from first-run fare to art films before it closed in 1981. The theater was bought in 1993 and converted into a photography studio. The Russell Building remains, but the Rialto is no longer in use as a theater. 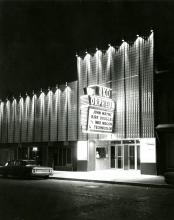 Champaign is also home to the New Orpheum Theatre, which was part of the historic Orpheum Circuit. The Orpheum Theater opened in 1904 as a vaudeville venue, but was torn down and reopened in 1914 as the New Orpheum. This new theater was operated and managed by the same company that had formerly operated the Walker Opera House. The theater was converted to show films in 1930 and owned by RKO before being passed on to the Kerasotes Company. The theater was closed in 1986 and in an effort to preserve the historic building, the space was renovated to house the Orpheum Children’s Science Museum. The museum opened in 1994 and continues to be a site of learning and fun for children all across the Champaign-Urbana area.

The Virginia Theatre opened in Downtown Champaign in 1921 as a vaudeville venue, but because it was further from the train station than the Orpheum, it was not always easy to get vaudeville troupes there. Luckily, the Virginia also screened films when it opened. By 1992, the Virginia was closed as a commercial venue for movies. The Champaign-Urbana Theatre Company formed with the express purpose of performing at the Virginia. A few months later they put on “The Music Man” and the space became a site for live performances once again. Today, the Virginia houses theatre performances, dance performances, concerts, movie screenings as well as many other events and performances.