Art Club Picnic, date unknown
During the Civil War, American women coordinated efforts to deliver supplies and uniforms to the front lines and to hospitals, acted as nurses on the battlefield, and worked in industrial and farming jobs vacated by men who had gone to fight. In the years following these same women found themselves without an outlet for the administrative skills the war years had cultivated. Perhaps more importantly they yearned for the camaraderie these activities had provided. Industrial and technological advances alleviated the time-consuming labor of homemaking, creating idle leisure time many women had never before experienced.
As such, civic activism created both a social realm and an outlet for organizational skills honed in the domestic sphere. Groups seeking to eradicate social ills proliferated, including the temperance and suffrage movements. Some believed that self-improvement through the study of art, history, and literature could produce a harmonious and enlightened population at large. The formal avenue of higher education was often closed to women (particularly if they were married and had children); women’s social clubs stood in its place to promote cultural and artistic appreciation. 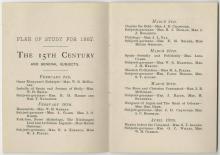 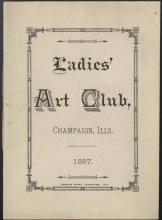 Champaign was the home of one of Illinois’s first such organizations. In 1876, Mary Healy returned from a trip to Dubuque, Iowa, where the social club scene was thriving. “Every woman, rich or poor, learned or unlearned, was running about with a book or article tucked under her shawl,” she was quoted in a 1939 Urbana Courier article. On October 30, 1876, Mrs. Healy invited her like-minded friends Ellen H. Bacon, Catherine Peterson, and Lucy Taft to attend the newly-opened Art Gallery on the University of Illinois campus. There they attended a lecture about the function of social art clubs in the community. In short order the women initiated a dozen members and decided upon a course of study for their group. Each year they would examine a particular era or subject from art history. Members would research and present papers on the topic. The history of Nineveh and Babylon was the first year’s subject; future curricula included Ancient Greece and Rome (1895), Holland (1900), and Men Who Made the Nation (1924). (Meeting minutes reveal that conversation often veered off-topic, however.) 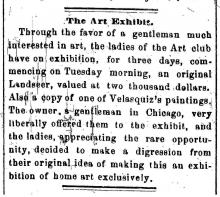 In July 1883, Lucy Taft’s son Lorado returned from studying art in Paris. During three years abroad, he had kept faithful correspondence with his family in Champaign, even sending his mother notes about a paper she was preparing on a Flemish artist. His celebrity, along with local enthusiasm surrounding his homecoming, inspired the ladies of the Art Club to hold an exhibition showcasing local artists. During the last week of February 1884, the art show was held in an unused schoolhouse in Champaign. It featured embroidery, paintings, and sculptures by local artists and also included “an original Landseer valued at two thousand dollars. Also a copy of one of Velasquiz’s [sic] paintings,” according to an item in the Champaign Daily Gazette. Over 800 people attended the weeklong event, traveling from as far as Chicago, Danville, and Columbus, Ohio.

Register of the Art Club Exhibit. Lorado Taft's signature can be seen on line 580.
The Art Club of Champaign continued to hold meetings and exhibitions for more than 125 years. Among these events were costumed Christmas parties inspired by Charles Dickens, formal luncheons with university lecturers at the Champaign Country Club, and gatherings in the homes of members who would discuss the world of art.
For further information about the Art Club of Champaign, check out the following items from our collection:
Art Club Records, 1881-1971: contains meeting minutes and yearly programs.
“Chapter XXIX - Women’s Clubs,” by J.O. Cunningham, from The History of Champaign County (1905), pp. 847-852.
“The Woman’s Club Movement in Illinois,” by Belle Short Lambert; published in Transactions of the Illinois State Historical Society no. 9 (1904), pp. 314-327.
“Interlude in Champaign,” from Lorado in Paris The Letters of Lorado Taft 1880-1885 by Allen Stuart Weller (1985), pp. 209-227.
“Women and Change 1870-1920” from The Roads They Made Women in Illinois History by Adade Mitchell Wheeler and Marlene Stein Wortman (1977), pp. 51-110.
Daily Gazette (1884), News-Gazette (1960), and Courier (1939 & 1952) article listings for The Art Club of Champaign.