The Children’s Theatre, Inc. (CTI) of Champaign-Urbana was established in 1938 as a community group to support children’s theatre and education in the arts. This organization was responsible for supporting many local organizations, including the Champaign-Urbana Theatre Company and the Urbana Park District Summer Youth Theatre Program. The Children’s Theatre, Inc. also worked closely with the University of Illinois’ Department of Theatre and the Krannert Center for the Performing Arts. Most notably, a member of the CTI, Susan McDonald, became the first Audience Education Director at the Krannert Center in 1981. Starting in 1982, McDonald began the Krannert Center Youth Series (KCYS), which focused on bringing different performances to Krannert that presented “child-friendly forms of theatre that complement classroom learning and the State of Illinois academic standards.” The KCYS still exists today to bring performances such as theatre, dance and music from a variety of backgrounds to give local children an opportunity to explore the performing arts.

While CTI focused mainly on theatre, they also supported other forms of art such as dance and music. Before KCYS existed, CTI worked in tandem with the Department of Theatre at UIUC to bring performances to the Krannert Center. In 1973, the University Theatre and CTI worked together to 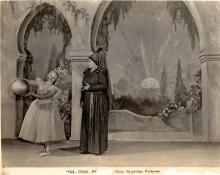 bring a production of “The Red Shoes” to the Playhouse Theatre at the Krannert Center. The show was not only geared toward children, but starred children from the National Academy of Dance. In 1953, CTI helped sponsor the first “Young People’s Concert”, presented by the Community Orchestra, made up of members of all ages. CTI’s dedication to not only theatre, but performing arts in general, made this organization an important supporter of arts education for children in the Champaign-Urbana area.

The CTI’s main function, especially beginning in the late 1980’s, was to donate money to local schools to attend performances as a part of the KCYS or to attend any other educational performances. The CTI held fundraisers to gain funding for this scholarship project and even received scholarship funding from charitable organizations including the local Kiwanis chapter and the C-U Optimist Club. Schools included were all elementary schools in Urbana School District 116, Jefferson Middle School, Franklin Middle School, Edison Middle School and Urbana Middle School as well as a few others. CTI not only made performances more accessible to children by offsetting ticket costs, but encouraged local schools to engage with performing arts in the community by making performances an opportunity for every child to enjoy.