Two collections have recently been processed by Archives staff and are now available for researchers. 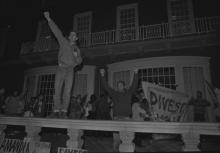 The Progressive Resource/Action Cooperative (PRC) Collection. The PRC (1985-2007) was a grassroots social justice organization originating from local activities that supported the international outcry against apartheid in South Africa, namely the Divest Now Coalition (formerly the Champaign-Urbana Coalition Against Apartheid). International and local groups urged major institutions—like the University of Illinois at Urbana-Champaign—to divest their funds from and sever ties with corporations and organizations that financially supported the racial segregation and oppression of South Africa’s apartheid system. Locally, PRC was also a major contributor to the Anti-Chief movement, which saw the end of the use of racist mascots at many universities – including “The Chief” at University of Illinois.

In addition to supporting Anti-Apartheid and Anti-Chief Movements, PRC also supported and participated in many local and international social justice issues, including the development of women’s rights campaigns, anti-war demonstrations, and anti-violence vigils. PRC also served as a valuable local resource for leadership development in activism through workshops and resource collections that taught activists how to organize, advocate, and mobilize campaigns around various social justice causes.

The PRC Records and Divest Now Collection are comprised of materials that demonstrate the history and work of the Progressive Resource/Action Coalition as well as its roots in local anti-apartheid activities. The PRC Records consist of documents, photographs, correspondences, newsletters, press releases, posters, flyers, memorabilia, and audiovisual materials that relate to the activities of the PRC and social justice causes that the organization supported, including the Anti-Chief Movement. Materials related to the local activities supporting anti-apartheid in South Africa are found in the Divest Now Coalition portion of the collection that consists of documents, publications, flyers, and t-shirts. 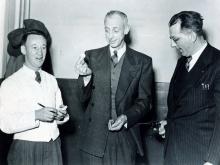 Race Inn and Chickens Come to Roost Collection. Founded in 1939, the social group “Chickens Come to Roost” was a loose organization of Champaign-Urbana businessmen and –women, reporters, and civic leaders. The group met weekday mornings at the Race Inn (115 S. Race St., Urbana) for coffee and rolls. The original members were Harry Bigler, Lester “Lum” Corrie, Mal Hickman, Roy Horn, and Oscar Steer, but an open invitation stood for anyone to join them. The group took their name from the game played at the end of meetings which determined who would pay the bill for the group. Attendance ran anywhere from 25 to 50 regular attendees, but guests were often not counted.  As well as being a social gathering, the members often contributed anonymously to charitable causes, such as providing meals to housebound individuals.

This collection contains daily attendance records for the social/civic organization “Chickens Come to Roost” (1941-1977).  The correspondence in this collection is comprised of short notes, post cards, and birthday cards to and from individual members. A small number of photographs date from 1949, and newspaper clippings span 1948-1978. Also included are the following artifacts: a rooster comb hat, an ashtray, and a menu from Race Inn.

You can discover more about these topics by viewing the Divest Now! Flickr album and listening to the Race Inn Local History Roundtables (available here and here).