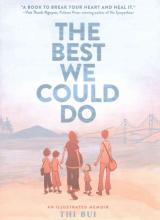 In her new book, The Best We Could Do: An Illustrated Memoir, Thi Bui tells the powerful story of her family's flight from Vietnam and how their experience as refugees reverberate throughout their lives. On the occasion of the birth of her first child, Thi Bui reflects back on her own childhood and seeks to better understand her family relationships. In hauntingly beautiful panels, she relates a family story that begins with her parents' lives growing up in Vietnam in the turbulent decades before and during the Vietnam War. After the fall of South Vietnam leads to ever-increasing desperation, her parents manage to flee with their children on a perilous journey by boat, eventually landing in San Francisco as refugees. Thi Bui and her siblings grew up as new Americans under the shadow of the hardships her parents had faced both in Vietnam and as refugees starting over in a new country. While her specific immigration story has its roots in the 1970s, it is especially timely and poignant given the global refugee crisis we face today.