Born in 1782, John W. Vance spent his youth in Pennsylvania, Kentucky, and Ohio. As youngster he and his brother, Joseph Colville Vance, chopped and delivered wood to stoke the fires of the salt works near their home. Later, they bought a team of oxen to haul salt to pioneer families in the Kentucky wilderness. This enterprise grew into a salt distribution company based in Urbana, Ohio. 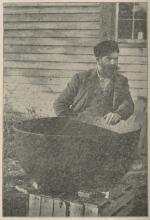 In 1824, seeking a source of supply for the brothers’ operations, Vance arrived near Danville, Illinois to take over a lease of failing saline plants from the state of Illinois. He brought twenty-four 140-gallon copper kettles north via the Ohio, Wabash, and Vermilion Rivers, traversing the final four miles overland by oxen. At peak production, between 80 and 100 kettles created 60 to 100 bushels of salt per week, selling for up to $1.50 per bushel. The industry was soon vital to the area’s growth providing a vital transportation network around Vermilion County: “No difference where the road began or in what direction it started, it generally terminated at the famous Salt Works,” noted Vermilion County historian H. A. Coffeen.

Vermilion County separated from Edgar County in April 1827. As the largest local employer, the salt works was chosen as a seat of justice for the new county. However, the production site had a low elevation and was in danger of flooding, so citizens decided the present site of Danville was more suitable. Sawmills, trading posts, and other businesses soon established in the new city. 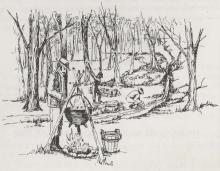 During this time, Vance became active in politics. He was elected to the State Senate in 1832, largely supported by the scattered voters from the west edge of the county, then known as the “Big Grove.” Perhaps a pre-election promise prompted Vance to introduce legislation to separate the Big Grove area from the rest of Vermilion County during the upcoming Senate term. Indeed, with a population estimated to be little more than 1,000 settlers, “It can hardly be said that the needs of the people [...] demanded separate county organization, for their members were few and their habitations scattered.” Nonetheless, the Enabling Act Vance authored was passed February 20, 1833. Included in the legislation was the stipulation that the new county be called Champaign, and the “seat of justice of said county shall be called, and known, by the name of Urbana.” Historian Clint Tilton writes that Vance was a “hard-headed businessman [...though] withal a dreamer and a poet, and this was his way of leaving a permanent memorial to the happy days of his youth in Urbana, Champaign County, Ohio.”

In 1831, the federal government insisted the State had received the saline reservations unfairly and forced Illinois to sell the land. Vance was left with 120 acres where the salt works were located, which he lost in a mortgage foreclosure in 1836. Soon thereafter, Vance’s Senate career came to an end as well, when he vehemently opposed the arrival of the railroads, insisting that “a single road would carry all there was to be carried to market for years to come.” In 1838, he lost his bid for re-election, although he did hold other public offices and remained active in politics until his death in 1857.