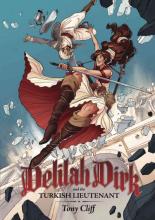 I have found an awesome comic series featuring a strong, adventurous woman named Delilah Dirk. The series is set in the Ottoman Empire during the 1800s. A Turkish Officer named Selim, known for always paying his debts and making an awesome cup of tea, interviews a captive woman. This strange woman doesn’t dress as modestly as Muslim women at the time. She claims to be the half-Greek, half-British daughter of dignitaries. She also claims to be a master swordsman with a flying boat. She claims a lot of others things, too, like that she will be escaping shortly. Which she does.

Unfortunately, Selim’s commander blames him for Dirk’s escape and plans to have him executed. Fortunately, Delilah saves him from the chopping block, as it were, and escapes with him. Selim is not well suited to life on the run, but he always pays his debts…

The series by Tony Cliff starts with Deliliah Dirk and the Turkish Lieutenant. The second installment, Delilah Dirk and the King’s Shilling, was released this year. Check them out, and don’t forget to log your reading for the Summer Reading Program!