Anyone seen an Alligator?

Anyone seen an alligator? Back in 1898, L.A. Wahl's 6 foot pet alligator went on a walkabout. (And you thought urban chickens were a neighborhood nuisance).

Don't worry. He was found 6 days later in the Boneyard branch between the Big Four and Wabash railroads, and although he didn't leave without some resistance he was returned safely to his home on West Main in Urbana. 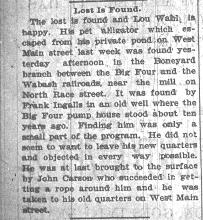