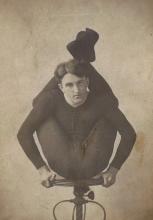 Walter C. Glines was the well-known proprietor of Gline’s Penny Store in Champaign, which he opened during World War I and managed until his retirement in 1956. However, before moving to Champaign and becoming a business owner, Mr. Glines had a successful career as a circus performer. 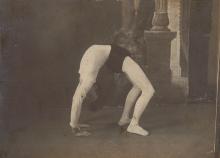 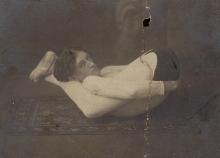 “Mr. Glines got his start at the Big Top in 1909 with Ringling Bros. as a contortionist and trapeze artist. He also followed the vaudeville circuit in the Middlewest, performing his contortion act with the aid of a single trapeze. He worked out of Chicago, Atlanta, and Kansas City.

Following his marriage in 1911, he used his high school education to get a bookkeeping job in Centrailia, but soon went back to the Vaudeville circuit, taking his wife along this time.”

In his later years, Glines performed as “Koko the Clown” and was well known in the Champaign-Urbana area, making appearances at ice cream companies, store openings, open houses, and the county fair. He continued to perform well into his seventies and claimed to retain his ability to perform the contortion act, which he had learned as a six-year-old boy.