"I wish you were here if only for a short time."

Yesterday marked the 150th anniversary of the surrender of Vicksburg, Mississippi to the Union armies commanded by Ulysses S. Grant during the American Civil War. It was a seminal moment: the Confederacy was now split in two and commerce could once again flow from the farms of the Midwest down the Mississippi River virtually unimpeded.

Samuel T. Busey witnessed the event in person, as the Colonel of the 76th Illinois Volunteer Infantry Regiment. Samuel and his brother Simeon were well known in Urbana, being quite successful businessmen (eventually culminating in the founding of Busey Brothers and Company Bank in 1868 – now simply known as Busey Bank). Strong supporters of the Democrat Stephen A. Douglas, Samuel nonetheless felt it his patriotic duty to suppress the Rebellion as the Civil War broke out. He raised a company of men for the 76th Illinois in August 1862. Rising quickly through the ranks, by May 1863 Busey presided over the entire regiment as its Colonel.

Samuel maintained a correspondence with his brother throughout his time in the Army. But the war set their political views on different paths. Simeon believed negotiation and conciliation would bring the South back into the Union. War, however, hardened Samuel’s views. “I wish you were here if only for a short time,” he wrote to his brother on June 7, 1863.  “I think if you could see the dreadful desolation of war you would suffer quite an abridgement of the freedom of speech before you would consent to have its dreadful hand laid upon our proud and happy prairie state – ah yes, my good fellow and I think your sympathy for Valandingham [Clement Vallandingham was a politician from Ohio who advocated immediate cessation of hostilities and spoke out against the abolition of slavery] and other home Traitors who are secretly aiding the Rebels and opposing the Administration in their honest efforts to suppress the most wicked Rebelion [sic] that ever disgraced Godds [sic] footstool would wilt and die out.”

Samuel Busey mustered out on July 22, 1865, surviving the war suffering only a slight head wound. Clearly though, his wounds were more than just physical. The transcription of his powerful letter home is posted below in its entirety (misspellings are from the original):

Yours of 27th by the hand of Dick I’ve rc’d yesterday.  We are still before the Rebel stronghold looking anctiously over the works and expecting every day to be invited to partake of the hospitalities of the City.  The Rebels are on quarter rations of bread made of corn and bean meal, and fresh beef.  They have no forage for their stock and have turned out side their lines more than two thousand mules and horses that have come to this wing – the left.  Deserters that come to this Division average ten a day.  Mostly from Georgia.  Many of the Tennesseans are anctious to join our Army.  All tell a pitiable tale about the state of affairs in Vicksburg and say it is imposable to hold out much longer unless Johnson comes to their aid which is not very probable as Grant has an eye to him.

I wish you were here if only for a short time.  I think if you could see the dreadful desolation of war you would suffer quite an abridgement of the freedom of speech before you would consent to have its dreadful hand laid upon our proud and happy prairie state – ah yes, my good fellow and I think your sympathy for Valandingham and other home Traitors who are secretly aiding the Rebels and opposing the Administration in their honest efforts to suppress the most wicked Rebelion that ever disgraced Godds footstool would wilt and die out.  You might then see more easily the necessity of the authoritative abridging to some extent in times of a civil war, our liberties, so wills and ____ in times of pease.  Kindness towards our erring brethren looks well enough a desire to have them brought back to aligiance through mild treatment is an exabition of a kind heart a noble disposition.  But come with me for a while march through snow, rain and heat.  Lay in mud and cold.  Live on hard tack and sow belly exposed to all the hardships of a soldiers life.  See your noble band one after another fall by disease and at last have four of your best and noblest, young and promising boys, unarmed and alone in the public road surprised and brutally murdered.  Shot through and through begging for mercy.  And then we will see if your are very particular about the means of suppressing the Rebellion.  I sware by the Eternal to have forty lives for four –

I understand that you and Simpson in speaking of me are pleased to accuse me of changing principles.  I am sorrow you have misunderstood me so much.  I am yet a Douglas Democrat when we come to the same issues.  I think Negroes too good to be slaves to the Rebels.

I fear Simpson is becoming fanactical and politically blind.

My love to your family, Mother and friends generally. 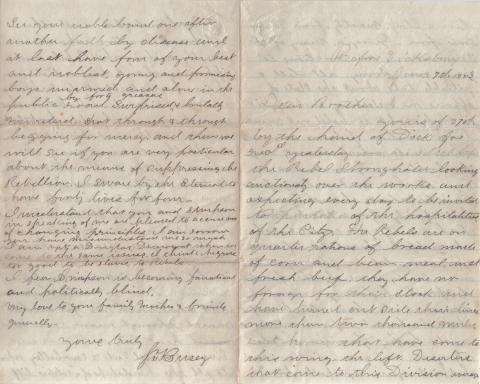