Soundex and the day-to-day 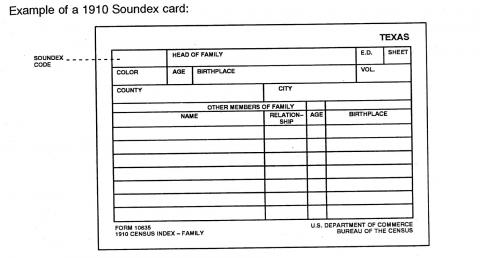 Soundex is a phonetic coding system used to link surnames that are spelled differently yet sound alike (i.e., homophones). The American Soundex code was adopted by the federal government in the 1930's to index federal and state census records from 1880, 1900 and 1910. It was originally created using a system of handwritten index cards, which have over time been microfilmed and/or digitized for current use. The necessity for developing such a system is apparent to anyone who has conducted genealogical work involving U.S. census records. If a surname was spelled in a non-standard way on the census, Soundex links that name to the standard spelling and other variations of that name found in the census record. Here is an example taken from The Soundex Reference Guide (1990):

Multiple spellings of the "Stewart" surname are assigned the same code and are grouped together in the Soundex. This makes finding unusual spellings of a surname much easier when conducting genealogical work.

How does it work?

The basic rules for encoding surnames are:

-Use the first letter of the name as the first digit in the code.

-If a letter is doubled, only use the first occurrence of the letter. For the name "Miller" use only the first "L" and skip to the "R" as the second consonant.)

-Repeat the three steps above. The end product should consist of one letter and three numbers. If there are not enough consonants in a name, add a "0" as a place holder. For the name "Miller" the code is M460; "M" is for Miller, "4" is for the first "L," "6" represents the "R" and the "0" indicates the lack of subsequent consonants.

How is Soundex used today?

I was inspired to research Soundex coding when I discovered the code for my last name was also the first four digits of my driver's license number. In many states Soundex or Miracode coding systems are used every day to assign identification numbers to driver's licenses and state issued identification cards.  In Illinois the code is as follows: the 1st section of digits represents last name, digits 4-5-6 represent first name and middle initial, digits 7 and 8 are the last two digits of a person's birth year, and the last three digits represent birth month and day. There is a coding system to these numbers and one can easily access a key online if interested in learning more.

Genealogy resources such as Ancestry.com and Heritage Quest use Soundex as a default search setting for the researcher's convenience. Researchers can change these settings if a Soundex match is not wanted. Heritage Quest also contains a .pdf document under the "Help with the Federal Census" section that contains a Soundex and Miracode Coding Guide and an Explanation of the Soundex and Miracode Indexing System.