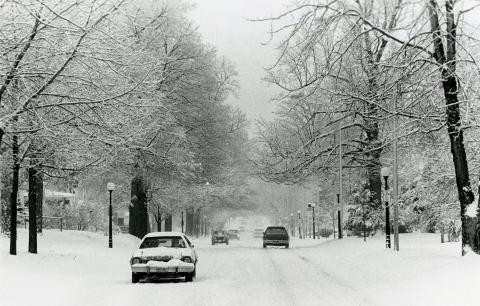 We were struck by the recent change in the weather brought the wind and snow storm of last week. Compared to other events in Champaign County's past, this one was pretty mild. Consider: the Blue Norther of 1836.

December 1836 had been fairly mild in Illinois, with one snowstorm reported followed by a thawing period. December 20th started as a particularly balmy day. The temperature in Augusta registered at 40 degrees that morning.

Then, as Spencer Ellsworth of rural Peoria County recalled, "The morning was mild, with a settled rain gradually changing the snow on the ground into a miserable slush. Suddenly a black cloud came sweeping over the sky from the northwest, accompanied by a roaring wind as the cold wave struck the land, the rain and slush were changed in a twinkling to ice."

Blue Northers are cold fronts of unique intensity. They are usually accompanied by dark clouds with a bluish cast (hence the "blue" in Blue Norther), strong winds, and sudden and dramatic temperature drops.  In this case, many areas in Illinois reported the temperature dropped some forty degrees in a matter of minutes (the temperature in Augusta was zero at 2 p.m.). Water turned to ice almost instantly. Livestock became frozen in place. Those persons who were traveling when it hit were suddenly desperately seeking shelter from the cold.

Martin Rinehart, an early resident of the three-year-old Champaign County, described the events of the day in East Central Illinois: "It began to rain and continued all day, when suddenly it turned intensely cold, making ice over the ground and freezing very hard. The sudden change caught many persons unprepared, and they were frozen to death. Two men named Hildreth and Frame were crossing Four Mile Prairie on that day. They became bewildered and lost their way when the change came. They killed their horses, and Frame crawled inside the body of his horse for protection against the cold, but it proved his tomb, as he was found therein frozen to death. Hildreth wandered around all night and when found in the morning he was so badly frozen, that he lost his toes and fingers."

So, while the return to winter last week was somewhat jarring, we have indeed seen much worse here in Champaign County!