While researching early newspaper articles about the Urbana Lincoln Hotel, I stumbled upon a small piece in the Urbana Daily Courier from August 6, 1934, regarding Abraham Lincoln's "mad" couch. The author discussed how travelers regularly used this "mad" couch in the Maplewood Hotel's lobby in Berlin, Wisconsin. Made specifically for Lincoln, as it is six feet, six inches long, the couch was reportedly from his office in Springfield. The provenance of the couch is recounted in the article. It was first left with General Brayman, "a close friend" of Lincoln's who acquired it presumably when Lincoln died. Though the article says when [he] did not return to Springfield," a much more polite way to say they took a dead president's furniture. After coming to Wisconsin, the couch was given to Dr. Victor Kutchin, who owned it at the time of the article's writing. The ownership story ends there at the end of a tiny, two-paragraph article placed among the "Evening Courier's Page of Interpretation and Opinion." [1] Read more about Lincoln's "Mad" Couch 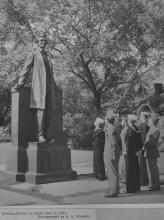 On July 3, 1927, Franklin H. Boggs, George M. Bennett, Joseph C. Blair, and Lorado Z. Taft met on the steps of the recently completed Urbana-Lincoln Hotel to give a dedication ceremony honoring the newest addition to the hotel, a bronze statue of the 16th president of the United States, Abraham Lincoln, titled “Lincoln the Lawyer”. The statue was designed and sculpted by Taft, a nationally known sculptor and University of Illinois graduate. It was beautifully executed with a standing Lincoln resting his arms across a slab of stone, looking as though he is about to give a speech or offer an argument in court.  Read more about Lincoln the Lawyer, a statue by Lorado Taft 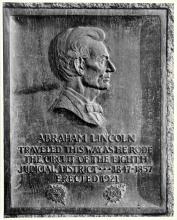 Abraham Lincoln’s birthday was this Sunday and next Monday is President’s Day, the national observance of Lincoln and George Washington’s births. Lincoln spent his early law career on the eighth judicial circuit, travelling with other lawyers and judges to try cases put before the court. Read more about Lincoln Firsts in Urbana

While spending time with your family over the holidays, chances are you heard stories about the “good old days” from your grandparents, aunts or uncles, or parents. Perhaps you can’t get enough of these reminiscences. If that’s the case, check out the Champaign County Historical Archives collection of over 250 oral histories. 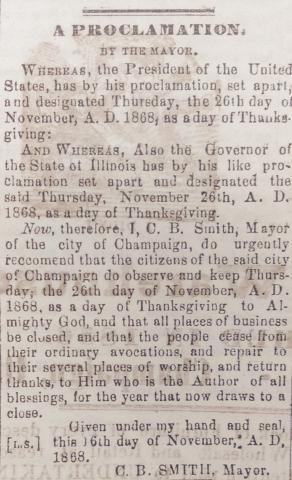 Read more about Happy Thanksgiving from Local History and Genealogy! 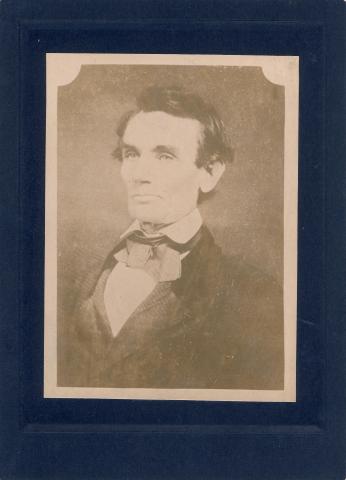