You might think it isn't worth reading a book when you know how it will end.  We're so used to twist endings and cliff hangers that the perception now is that you just can skip to the end and figure out the basic story.  For some books that might be tru Read more about They Both Die at the End

Sefia has been on the run with her aunt Nin for most of her life.  Her parents were hunted to their deaths because of a rectangular object they had in their possession.  Now it's up to Sefia to keep the object safe.  Unsure if it is powerful or valuable, Sefia and Nin have kept moving, never staying in one p Read more about Magic Words, Pirates, and Assassins (Oh My!)

Protect the otaku house!  The residents of Amamizukan all have topics they geek out over.  And they're all completely different.  But what bonds them is an understanding that their individual passions are all consuming and generally looked down on by the rest of the world.  A Read more about Otakus Unite! (also Jellyfish Fashion)

Go to college and play baseball for Stanford University, or accept an offer from the Pittsburgh Pirates as their third round pick? Many high school seniors face this dilemma each year, and it’s no different for Jill Cafferty. Read more about A Season of Daring Greatly 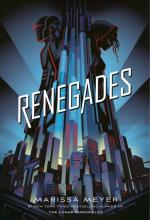 The same author that created everyone's favorite steampunk Cinderella has now turned her eye to the superhero genre.

Read more about Don't Call Her a Hero

Henry "Monty" Montague has plans for his year long sojourn to Europe before he's doomed to return and take over the family estate.  Those plans do not include a strict chaperone that will not let him gallivant about town.  Or taking his boo Read more about The Gentleman's Guide to Vice and Virtue

Witches of Hylund draw magic from the earth using glyphs, or special symbols that represent various elements like air or fire. Read more about She Got the Moon in Her Eye

Zed and Brock are best friends...even though they don’t have much in common. Zed is from the Servants Guild, one of the poorest groups in the City of Freestone, while Brock is from the wealthier Merchants Guild. Zed is shy and quiet, while Brock is bold and mischievous. Zed is half elf, the only one left in Freestone. Read more about This Adventure Just Might Kill You...And Your Best Friend