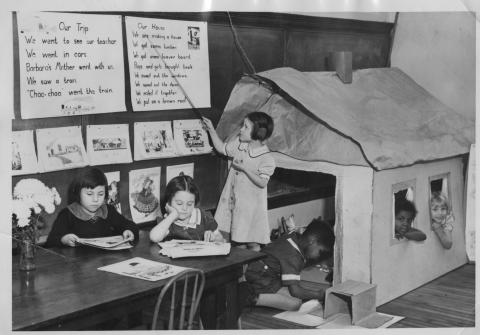 Read more about Urbana Elementary School Students Over 75 Years Ago

Friend of the Archives Steve Burgess passed away suddenly on Friday, November 22, 2013. Deepest sympathy to his family and friends.

Steve was on a journey to honor his father, James R. Burgess, Jr., who was the first Champaign County African American State's Attorney and also a lieutenant in the 761st Tank Batallion under George Patton in WW II. Steve's mission was to have a federal building named for his father.

May his mission be accomplished. Read more about Rest in Peace Steve Burgess

This past month, Leal Elementary  School students in Tiffany Clark and Molly Headtke's Grade 4, made several trips to the Champaign Read more about Leal Elementary School Students conduct research at the Archives

With Veterans Day just around the corner, it is the perfect time to check out the newest photograph set on the Urbana Free Library Digital Collections Flickr page: "Veterans of Champaign County." This set can be accessed at the following link: https://www.flickr.com/photos/98945443@N05/sets/72157637157159524/. Read more about "Veterans of Champaign County" Photograph Set on Flickr

quack2 Read more about "Rascally and Unjust"- Makes one wonder if the good doctor ever got his money....

It's that time of year again!

For the next two months, October 1-November 30, 2013, Try-It! Illinois offers library staff and users of the more than 5,000 ILLINET member libraries the opportunity to survey and evaluate a wide variety of electronic resources. Thanks to the partnerships between the Illinois State Library and the participating electronic resource vendors, there is no charge for accessing these databases during Try-It! Illinois. Read more about Try-It Illinois